****Please note that this review is totally full of spoilers**** 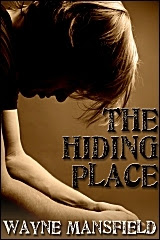 I'm in two minds about The Hiding Place. From an adult LGBT fiction piece's perspective it tells an interesting story. It is well written, albeit too short to do the book the justice it fully deserves. Strong topics are covered - bullying, family apathy, teenage suicide, mental health, LGBT issues. All important and all right up my reading alley.

It is an incredibly sad story. It is very well intentioned and it certainly brings home a point - bullying with no assistance for the victim, with no safe place to escape, has extreme effects on the human psyche. When you are young and you do not have peers who support you, your own family doesn't seem to care what happens to you, there seems no way out from the physical and emotional torment you live day-to-day it can appear that's all there is to life. And as catchy as the slogan "it gets better" is, it does little to help when the world seems to hate you. There is also going to be impact on behaviour, mood, and an individuals ability to cope and handle life, which can have far reaching/long term effects if not supported correctly.

Just a brief look at the book. Bryan is bullied at his school. Occasionally a couple of the girls lend him a hand but nothing overly helpful. His father drinks, although this wasn't explored, his mother has never asked him how his day is and seems more angry with her son than the perpetrator when someone steals his bike and slashes the tyres and seat. The best quote came at this stage in the book where Bryan has had enough - a caricature of him sucking cock is in his bag, he has been deliberately branded by a tennis ball, and he has also been knocked over. Then he goes into a newer teacher's class, one where she has trouble being authoritative and, once again, he is on the receiving end of bullying -

...Bryan would watch in silence, trying to look as small and insignificant as possible because when Miss Stanovich began losing control she would pick on him. Why don't you know the answer? How many times do I have to explain it? Were you paying attention at all when we went through this yesterday? And the boys would laugh because at that moment she was one of them, doing their job for them

My primary conundrum is that The Hiding Place sits in no-man's-land. The cover looks YA, the premise sounds YA, it starts out YA, but it veers out of YA territory with Bryan's dreams, not his initial ones, the latter ones, and his condom-less experiences when he leaves his small town in WA and attends university in Perth. To me it's a shame, as this could have been a good YA resource.

Having said this, are the actual experiences in the book real? Sadly, yes. A naïve, troubled eighteen year old trying to fit in, equating sex acts to love, with no family or peer support to ground or guide them is going to, more often than not, find difficulties/trouble - which the MC, Bryan, did. So it is a strong piece of fictional writing. There is more to this book. The dreams that Bryan has are the escape from his life, where he dreams of his fantasy lover. Yet, paradoxically, these dreams are a catalyst for a later attraction and events. There is also mention of someone sitting on Bryan's bed of a night. From the beginning of the book Bryan feels there is something there. This is an interesting part of the story for me.

Bryan makes friends when he is at university but they quickly turn on him when they discover he hasn't been with a girl, like he said he was, but rather he was seen out the back of a local gay bar with a guy. Rumours spread and his friends make him feel like he's back at school in his home town all over again. He has one friend, Francesca, who is nice to him but he is unable to really bond with anyone, particularly when they question him or try to make him see things differently to the way he perceives them to be. Bryan decides to move off campus into a place with a guy he has met at the local gay bar, Ben. Bryan finds himself attracted to Ben, he likes older hirsute men and Ben fits the bill. They have sex and Bryan reads more into it, however Ben crosses a line I could not forgive him for. Bryan is not stable throughout The Hiding Place and it descends into a dark place for him. Bryan finding himself in the Swan river coating himself in mud after feeling rejected again, having a full meltdown -

Again he reached down, his fingers digging in until his palms were full of mud, and again he smeared his chest and belly with it. The next time he rubbed it on his face and neck. He thrust his hands back into the water and collected more and more mud, finding new places to smear it.

"I'm mud," he said, more forcefully this time. "I'm mud. Nothing but mud. Always have been. Always will be."

This was an extremely sad part of the book. Years of emotions and rejections combining and rising to the surface in a troubled young man. One blow too many delivered to his fragile mind.

I find I must have my say on something that I took exception to. After Ben asks Bryan to leave and Bryan 'loses it' in the Swan river, the word "friend" is used to describe Ben.

...."who told your friend Ben where to find you earlier this evening?"

I didn't like it. I found it a poor word-choice here. Someone who fucks you when they think you are sleeping., when you haven't given consent, without condoms, who is thirty nine to your eighteen is not a friend....Ever. I understand this is dark fiction, I still didn't like it. It detracted from a poignant part of the story for me and made it seem rather....flippant.

Overall this is a very interesting piece of writing and the author-note at the end about bullying is a very important one. This is my first book by Wayne Mansfield and I'm inclined to want to read more.  I recommend this book to those who like a darker LGBT piece of fiction rooted in reality.