Play Me, I'm Yours, Madison Parker 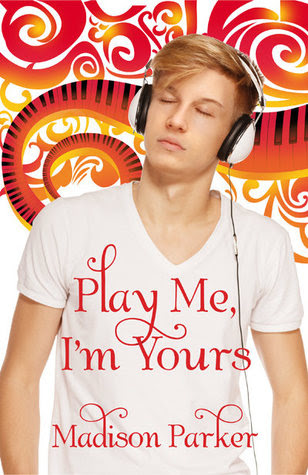 A wonderfully written Young Adult book by an author who has quickly jumped on my favorites list.

Lucas Tate is a seventeen-year-old boy.  He enjoys playing piano over sports.  He dresses a little different from his classmates.  He is sensitive and is known to tear up without much warning.  He doesn't enjoy what some might consider manly things: working on a vehicle with his father, helping with repairs around the house.  That is just not Lucas. He has only one friend, a female named Trish, who has decided to take him under her wing though her plans are not always what's best for him.  He's made fun of and bullied because he doesn't quite fit in with the rest of the teens at his high school.  He has a fifteen-year-old brother who is embarrassed by him, a father who doesn't support his music and is convinced that it turned his boy different.  He was close to his mother once upon a time but that changed when she decided that he was becoming a mother's boy.  She is known to tell him to try harder to make friends if he mentions the bullying.

Twinklefingers.  Fairy Tate.  Lucy Liu.  Lucy.  These are only some of the names that Lucas is taunted with each day.  His brother hates him.  His father is ashamed of him.  His mother gives him bad advice instead of encouraging him to be himself.  His teachers do nothing to stop the taunts and often laugh along with the others.  With the exception of Trish, Lucas is alone.

Trish is the complete opposite of Lucas.  She is outgoing and personable.  She has made it her mission to find Lucas a boyfriend.  Throw in his mother doing the same and life gets even more complicated for the teen.  Funny, considering Lucas has never come out with either.

Lucas's mother tries to set him up with a popular football player who defines the word "hot" for all the girls at Providence High School, Alex Goodman.  Trish chooses an openly gay boy, Donovan, who has probably never seen the inside of a closet in his life.  Both boys are popular but in different ways.   Donovan is full of self-confidence and cares very little about the feelings of others, Lucas included.  Alex is an all around nice guy who secretly feels that Lucas is being treated unfairly by others.

Both boys are obviously out of Lucas's league.  Why would they want the freak Lucas?  Then there is the fact that Alex is obviously straight.  Donovan is openly gay but he's not a nice guy and this is proven on more than one occasion both in public and private.

Lucas harbors a crush on a boy on his brother's swim team, Zach... a boy who writes the most romantic poetry for class assignments that they bring Lucas to tears.  The poetry is obviously written for Zach's girlfriend.  What would it be like to have someone love Lucas the way the other teenager obviously adores his girlfriend?  Lucas has to keep his crush to himself as no way is Zach gay and if he is?  He would never look at Lucas twice.  Lucas keeps his crush to himself while quietly watching the other boy during swim practice and secretly wishing he would look Lucas's way.  Lucas will stick to his music and hope that someday he will have what others seem to have.  He just has to survive high school.. and Trish... first.  What Lucas doesn't know is that Zach also harbors a crush on Lucas.

This is a very nice Young Adult book.  While there are some similarities to other books of the genre it does not fall into the more of the same category.  Each main character is gay though not out with everyone.  Neither is struggling with their homosexuality so there is none of the running away in fear of one's feelings like you see in other books of this type.  Your heart will break for what Lucas is forced to endure from not only his classmates but his own family.  You will see the value of friendship and learn that it's okay to be yourself.  You will fall in love with Zach as he works diligently to prove to Lucas that he sees him for himself, not how others do.  You will root for both teens to find their happily-ever-after.

There are a few funny moments in this book.  Lucas's dad gives a sex talk to Lucas and his brother that is priceless.  I found myself giggling the entire time.  Lucas loves Cyndi Lauper and this is shown in a very big way.  I loved reading about his love of eighties music as that was this reviewer's decade, so to speak.

The secondary characters, while not all likable, were entertaining.  My feelings are mixed on Lucas's parents and brother.  Donovan is the type of character you love to hate.  Trish, though she means well, is a bit overbearing and inadvertently puts Lucas in embarrassing situations at times.  Alex Goodman is the perfect straight friend who is willing to give up part of his popularity if it means standing up for his new friend.

As for Lucas and Zach, I adored both from the very beginning.  Lucas just wants to be himself.  He wants to find love.  He wants friends.  Through no fault of his own he has a hard time doing all three.  Zach is perfect.  The star of the high school's swim team and an all around great guy.  He has to work hard to prove to Lucas that he is worthy but when he does it is done beautifully.

Overall, an outstanding book.  I discovered this author by accident a few months ago when I read her short story, Sock it to Me, Santa! a book which made it on my favorites of 2012 list.  When I saw that Play Me, I'm Yours  was coming out I could not read it fast enough.  Madison Parker has now gone on my very short author auto-buy list.  I can't wait to read more of her work.

This book was provided by Harmony Ink Press in exchange for a fair and honest review.