One man must overcome a horrific past in order to accept love and to start living. 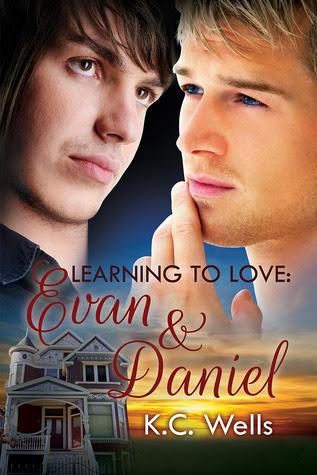 Evan Wainwright is convinced that somewhere out there is the man for him.  He believes in soul mates and has no doubt his will be coming into his life at some point if only that man would get a move on already.  He is tired of waiting and after bringing his roommates Sean and Michael together he wistfully watches them as they build a life together, happy for them but yet sad that he has yet to find his own true love.

Evan is introduced to the reader in Learning to Love: Michael & Sean, the first book of the Learning to Love series, reviewed on this blog.  Evan is openly gay and was instrumental (in more ways than one) in helping his roommates not only discover their own sexuality but their love for each other.  The men (all 19) live in a large house on their college campus.  Sean and Michael have gotten married but they still share a room in the house.  A new roommate, Daniel, moves in after Adam, a homophobic bastard, was forced out in the first book.  Daniel is introduced toward the end of Sean and Michael's story so the reader knows little about him other than he is skittish and has secrets.  Daniel and Evan clicked immediately during their first meeting and they eventually begin a tentative, non-physical relationship.  Learning to Love: Evan & Daniel begins with the two men already in a relationship during the weekend of Michael and Sean's wedding.

Daniel has secrets that are literally tearing him apart inside.  He has fallen in love with Evan but is unable to share the reasons that keep him from going beyond hugs and kisses with the man. All it takes is almost going one step closer and Daniel panics and pulls away leaving a hurt Evan.  Evan doesn't push in any way but he is desperate to know what is hurting Daniel and to do everything in his power to help him through it.  Daniel won't budge.  He feels that telling Evan would push Evan away and that he will see Daniel in a new, bad light.

This book is titled Evan & Daniel but it is also a continuation of Sean and Michael's story.  Michael was attacked in the first book by Adam and his homophobic friends.  These people go to trial in the second book and Michael is forced to relive the attack that put him in the hospital months earlier.  This is not the only part mentioned about Sean and Michael.  They are every bit a part of this story as they were in the first one.  While I am always happy to revisit characters  I felt that at times it took away from the story of Evan and Daniel.

Unlike the first book, this one is not filled with sex from almost the first page because of Daniel and his secrets.  Don't get me wrong, Sean and Michael are still doing it anywhere and everywhere but the book does not turn into a major sex fest until around the 50% mark.  Once Daniel is able to move beyond his issues the second half of the book is pretty much nothing but sex.. with Evan and Daniel and with Sean and Michael.  Almost every conversation centers around sex.  They all have sex in front of the others without qualms.  For this reader it got to be too much.  I am all about good sex in my books but I feel that it was used in place of dealing with other issues so it got to be too much of a good thing quickly.  Also, Daniel had been unable to do anything sexually because of prior sexual abuse by his stepfather.  Instead of moving into it slowly once those feelings were resolved, he went from being a shy, skittish virgin (I am not including the stepfather in that statement) to not only wanting sex constantly but being in complete control with not just Evan but during a specific scene with Michael and Sean in the room with them.  It was a like the flip of a light switch and this man went from scared virgin to sex expert.  This (and what followed throughout the book) was extremely unrealistic in every way.

I don't know that I have ever read a book (and I've read a lot of books in my day) where all (not just the main characters) are as kissy and huggy as these four guys.  I am an affectionate person.  I am a big hugger and I am all about showing affection but these guys?  They take it to a whole new level.  Everyone gets lingering kisses on the mouth, everyone gets hugged constantly and everyone loves each other.  The last two I get but the first one?  No.

There is zero conflict between the main characters, Daniel and Evan and Michael and Sean.  Yes, Daniel and Michael must both deal with issues of the past so I am not referring to that in any way.  What I'm referring to is that both couples are perfect.  They never argue with their partners, they never disagree and both relationships are so sickeningly sweet at times that it was way too much for this reader.  Also, there are constant (literally constant) terms of endearments thrown out in every sentence.  Michael calls everyone sweetheart and Sean calls everyone love.  This was okay for the most part.  But the word gorgeous is overused as is beautiful and others.

The history of sexual abuse on Daniel by his stepfather comes out in a big way when he starts to suspect that his eleven-year-old brother Miles is now being abused by the same man.  This is where the author could have totally won me over but she didn't.  Daniel has reason to suspect that his little brother is being sexually abused but yet he does nothing for months.  Oh, he places phone calls to his brother on occasion but that is the extent of it until something happens much, much later.  Daniel had been raped repeatedly by his stepfather but it stopped when Daniel came out as being gay.  He leaves to go to university and he just assumes that the man would not pick up where he left off with the other young male in the home?  I get that Daniel was an emotional wreck as a result of his own abuse but I feel that once he suspected that Miles was going through the same thing he should have found a way to do something, not wait months and months.

These guys (all four) are a forgiving bunch and I don't necessarily mean that in a bad way with the exception of a couple of things.  One, Michael forgives one of his attackers too easily, and two, something happens between Daniel and Evan's brother that I felt should not have been brushed off as a nonevent.  Daniel was not the problem and was completely innocent but Evan's brother was not innocent in any way.  Then there is the issue with Daniel's mother when Daniel finally does something about the abuse on him and the suspected abuse on his little brother.  His mother was deplorable.  She treated Daniel horribly and only later did she see that he was telling the truth about his stepfather.  Of course her behavior was forgiven.  Under no circumstances could I see myself forgiving her so easily but that is just me.  Also, it comes out that Sean and Michael are told Daniel's secrets long before Evan... as in months before Evan.  Instead of getting angry that Daniel trusted them instead of him, Evan brushes it off like it's nothing.

As with the first book in the series, this one is filled with exclamation points in the dialogue.  I am able to overlook this at times but this is hard to do when they are in almost every sentence of dialogue.  Others may be able to overlook it but I found it to be distracting and it took away from my enjoyment of the story.

Overall, this was a good story.  I enjoyed seeing Daniel finally get beyond years of abuse so that he could finally be happy with Evan.  Evan, I adored.  I adored him in the first book and I adored him in this one.  Sean and Michael I liked but I found them to be a bit much at times.  As mentioned above there is zero conflict between them as a couple and I found that (along with many other things in this book) to be extremely unrealistic especially considering the ages of the characters, nineteen.

The next book in the series will be about Josh and Chris.  Josh was a nurse on duty on the night that Michael had been attacked and he is the son of the police detective investigating the case.  I liked Josh right off when he was introduced in the first book.  Chris, on the other hand, I am unsure about.  He was one of the men who attacked Michael that night and while he played a smaller part than the others I did not feel that he should have been forgiven so easily and brought into the fold, so to speak.  I am sure that I will read Chris and Josh's story when it is released.