A Kiss in the Dark, Eli Easton 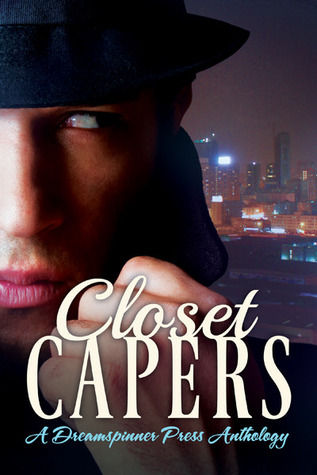 It all starts with a kiss in the dark when the lights go out during a party.  Lane Lester is grabbed from behind and is given the most intense kiss he has ever experienced in his life.  The room is pitch black and he has no idea who is kissing him and whose erection is pressing against him in the dark.  All he knows is that it feels right.  The stranger disappears before the lights come on and Lane is left aroused and confused.  Who had kissed him?  This takes Lane on a journey to find out who the mystery man was even resorting to hypnosis when his straight roommate wants to experiment. Little does Lane know but his 'admirer' is much closer than he could have imagined.

This is a great start to the anthology.  The reader gets an idea relatively early on who the mystery man is but nothing is confirmed until much later.  A great story and I will definitely be seeking out more from this author. - 5 stars

A nice story about two men who come together over a special blend of coffee.  For a non coffee drinker this might come across as a bit out there.  As a person who can't function without her coffee every day, I totally get it. :)  Nice story. - 3.75 stars

Grey is an associate professor of history at Hartwell University.  He has been attracted to the librarian at the university, Henry Adams, since the first time he met him two years earlier.  Henry  obviously shares the attraction but he rebuffs Grey at every turn.  It takes some time... and a bit of light stalking... for Grey to uncover Henry's secrets.  Nice story but it bordered on sappy when it came to the dialogue.

"I've brought a couple of trinkets for you, although the chocolate could never hope to compare with your sweetness, nor the champagne with the intoxication of simply being in your presence."

That's only one example.  This is the entire story.  I'm not saying it's a bad thing necessarily but it came across as a bit unrealistic as I know no men who speak to each other like that during every conversation. - 3 stars

Set in New Orleans in 1855, a professional gambler must find out who is spreading rumors saying he is cheating during his poker games.  He enlists the help of his manservant, prostitutes and M. Murphy, Confidential Agent to help him get to the bottom of the rumors so he can clear his name.  There are some interesting characters and the setting was nice.  - 3 stars

Two men are about to celebrate their anniversary and one thing after another goes wrong for one as he tries to make his way to the meeting place.  There is deception, anger and confusion that is quickly resolved though I ended the story feeling a little lost.  - 3 stars

What a cute story!  Brian and Craig are an established couple.  Brian has always been the one who has been the most over enthusiastic and over the top with his feelings and emotions.  He feels that he strong-armed Craig into the relationship and this leaves Brian feeling as if maybe his feelings are a little more than Craig's.  Craig proves himself later in a big way by surprising Brian with something major.  It takes a lot of secrecy to do it but he does.  The resolution is perfect.  - 4.5 stars


Made Good Under Pressure, Maja Rose

Set in New York City in 1926, two men who are from the complete opposite ends of the spectrum come together in a very sweet way.  Billy is poor and has been poor all his life.  He entertains himself by hanging out outside of a local dance hall where the uber rich go in the evenings.  While being bullied by a rich and snobby man, Billy is rescued by Eric and Julia Hamilton, a brother and sister.  Eric talks Billy into going inside and they spend the evening dancing.  Eric wants more but Billy knows it will never work because of their different financial statuses.  Julia on the other hand has other plans.

Normally I avoid books that are not set in current time.  I don't like going back so I tend to stay away from those types of stories.  I would have really missed out had I skipped over Made Good Under Pressure as it is a very good story.  I will definitely be searching for more from this author.  - 5 stars

Tempest for a Teacup, Andrea Speed

A private detective is hired by a spoiled rich kid to find his Morkie who disappeared earlier in the day.  Princess is the dog and was taken from the kid's doggie purse bag while at a park.  The detective enlists the help of his boyfriend who just happens to be the only honest police officer in the city. Enlisted may not be the correct word as the boyfriend knew that if he didn't help that the couple would have no time together until the 'case' is solved.

This story is very entertaining.  There is a lot of humor and I loved all of the characters, both main and secondary.  - 4.5 stars

Dom is the caretaker of Little Lexington's, a village of miniatures.  He is also an artist who paints each miniature by hand.  There's a wedding chapel, a carousel, a woman hanging clothes on the line, a train, as well as various other buildings and groups of people.  During his nightly run-through at the end of a work day, he discovers some of the scenes have been changed and this happens often over time.  In one instance, a train has been overturned and there are bodies scattered about.  In another, Mrs. Baxter who is supposed to be hanging clothes on the line is now being taken from behind by a local villager.  Then there is the marriage scene where the bride is changed to a second groom.  Dom has no idea who is changing up his scenes and neither does his boss George or another coworker, Riley.

Dom has been attracted to Riley since the first time they met but he knows that Riley is out of his league.  But George has plans that involves both men.  They are to do a stakeout to find out who is messing with the miniatures.  Of course there is more to George's plan but Dom and Riley don't know this at the time.  A very good story.  - 4.5 stars

Follow along as Lawrence Frightengale (aka Larry French) and his lover Myrna Boy (aka Nicholas Benson) embark on a search to find a black El Dorado that has been carnapped a couple of hours before it is to be driven in a parade.  Lawrence is the host of Terror Time, a popular television show at an independent television station.  The car is on loan from the owner of the station to be used in the Out & About parade.  Knowing that Lawrence will be out of a job if the theft is discovered, he, Myrna and Myrna's dog Bootsy go on a quick journey to try to get the car back before anyone finds out.  There are surprises and a humorous cast of secondary characters.  A very entertaining read.  - 4.5 stars

When Jules inherits his aunt's large farmhouse, he is faced with more repairs than he can afford and seeing the bully who made his life a living hell as he was growing up.  The former bully, Henri, is all grown up now and no longer the child terror.  Slowly arrangements are made for the  house and a relationship between Jules and Henri is born. Nice story though I would have liked to have seen a little bit more added to the ending.  - 4 stars

Phil Collyer is a manager at a pharmaceutical company.  His job is busy, at times stressful, but he is determined to be a good boss.  There is one thing that he must have in order to keep up his good attitude:  caffeine.  He starts each day with tea and then drinks coffee throughout the day.  But lunchtime is for his one can of cola.  He looks forward to that can every day.  When his colas start to disappear from the company refrigerator, Phil gets cranky and he takes it out on his employees.  Every day he puts in a new can and every day the can disappears.  Then notes start to appear in place of the soft drink.  Notes that I thought were hilarious.  As time goes by, he gets help from a hot IT guy Kester.  They start trying to discover who is stealing the drinks and in the meantime they get close.  The man who Phil thought was out of his league is now right there wanting Phil as much as he does Kester.

I really loved this story.  The only issue I have with it is that I feel that once the cola thief was exposed that Phil overreacted in a big way.  Otherwise, a very humorous love story.  I love all of the characters.  - 4.5 stars

Overall, a great anthology.  I may have enjoyed some more than others but each one was very entertaining.  My overall rating for the anthology is 4.25 out of 5 stars.

This anthology was provided by Dreamspinner Press in exchange for a fair and honest review.