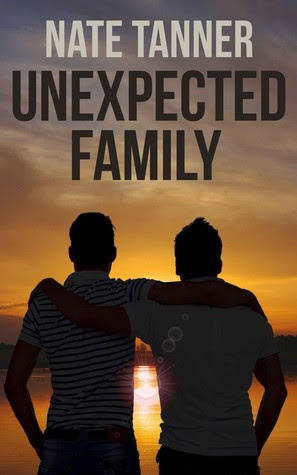 Two men whose sons hate each other come together and try to make a family.

I will start with this......... I'm going to guess that this book was written by someone who has absolutely no clue about parenting or children.  Harsh?  Probably but that is what I got from the parenting of the two men in this book, Will and Tom.  I don't claim to be an expert but I did help raise three sons of my own.

Will meets Tom while out on his morning run.  Tom comes across as arrogant right off but when Will takes a tumble Tom helps him out and even walks him back to his car without finishing his own run.  Will, who has only lived in the area for about six months, eagerly embraces what he thinks may be a nice friendship with another man.  Unfortunately, he learns that evening that his ten-year-old son Andy and Tom's son Braden are sworn enemies at school.  A letter has been sent home from the principal advising Will that Andy had punched Braden because he was being made fun of.

Will and Andy barely scrape by financially. Tom and Braden are more than comfortable. Apparently Braden has the attitude that Andy is beneath him because of the clothing he wears and the fact that he goes to a Catholic church for after-school care each day. Andy is already self-conscious about what he doesn't have so he snaps when he hears the other boy making fun of him in front of other children.  When Will goes to discuss this with Tom, Tom surprisingly is understanding and they set up an outing to try to bring the two boys together so they can hopefully become friends.  This outing is a few days later at a science museum.  Everything is going well.  The boys are getting along fine after awhile and it is turning out to be a nice day for all.  Until.........  religion is brought up and not only do the boys have a disagreement but so do the adults... the adults (in my opinion) acting more like children than their ten-year-olds.  Somehow, someway they get over it and there are play dates between the boys and the daily running together helps the men to become friends.  Much later it comes out that each has had experiences with other men so they start working toward getting each other in bed.

All of that is well and good though I liked neither man by this point.

Will is a recovering alcoholic who was divorced a few years earlier because he got drunk one night and hit his wife.  "It was only one time" is said many times throughout the book.  I guess that justifies it?  Granted, the woman had beat the hell out of him and their son for years but that still does not excuse what he did.  You remove yourself...... and especially your child....... from the situation.  You don't punch your wife even if it was only one time.  Somehow he ended up with full custody of the child.

Tom got a divorce from his wife because he decided that being faithful to one person forever was a bad thing so he decided to cheat on her with a man.  The divorce only happened because Tom got caught.  Had he not, he would have continued with his affairs and probably stayed married.  Tom also got full custody of his child.

Then there is the religion thing.  Tom is adamant against any type of religion and he has brainwashed his child to feel the same.  I suppose how one raises their child is their own business but.... Tom not only allows Braden to openly criticize Andy in regards to religion but he also lashes out at Will for his own personal beliefs as well.  This is not a debate or a discussion.  This is a "your views are totally wrong and I'm going to tell you why and push and push until you agree with me" type of discussion.  Will gives in which made me dislike him even more.

Tom basically encourages his son, who he has spoiled rotten, to be hateful and mean.  He is never punished or made accountable for his actions in any way.  There is barely even a discussion when Braden does something wrong.  Will, on the other hand, makes Andy accountable for his bad actions and he is punished accordingly.

So, we've covered the fact that one man is a wife abuser and the other is a cheater.  One spoils his child and allows him to hurt others without repercussions.  The other does try to do right by his child but is criticized for it so he backs down, allowing the child to get away with things.

Will is a recovering alcoholic who uses the alcohol excuse for hitting his former wife.  He has not had a drop of alcohol in over two years.  Tom is aware of this.  So what does Tom do?  Tries to push a beer on him just this one time.  Will refuses it.  Later the two men are on a camping trip (long after they begin their sexual relationship) and Tom has whiskey and what do you know?  Will helps him drink a bottle but that's okay, right?  It's just this one time.  It doesn't work that way and for the author to say it does was wrong on so many levels.  If you are an alcoholic you can't just have a drink or two and all will be okay.  Of course Tom throws this back at him later.

Andy and Braden have finally been told that their dads are in a relationship.  Braden handles it okay but not Andy.  Andy gets upset and sullen.  This is understandable as he has been taught that men are not supposed to be together.  Does Will try to explain things where the child will understand?  Does he sit down with him and try to explain how it's perfectly okay for two men to love each other as a man and woman would?  Not even close.  Will decides to be a jerk about it.

Andy and Braden both turn eleven during the same week.  Will and Andy meet Tom and Braden at the mall with the intention of switching kids so shopping can be done for birthday gifts.  Tom will be with Andy and Braden with Will.  Braden tries to walk off from Will for a few minutes but Will is adamant that the boy stay with him. He is responsible and refuses to allow him out of his sight.  Good parenting there in my opinion.  When Andy and Tom do not meet up with them at the correct time and place Will panics and with good reason.  Later Tom shows up with no Andy.  They frantically search the mall for the missing boy and Will finally figures out that he had gone in a movie theater... not just gone into a movie theater but had purchased a ticket as well as popcorn and a drink.  The kid knew that everyone would be worried but he decided to be bratty and go to the movies anyway as a way to get back at his father for whatever reason.

Bad enough, right?  No problem.  Andy was found and he was fine.

Tom and Will are in the office of the theater manager. It's obvious to anyone reading the book that Andy should be held accountable for his actions.  He knew what he did was wrong.  He knew that he would be punished for it as he should be.  Everyone in the mall had been looking for the child and Will had convinced himself that some random stranger had kidnapped his boy.

What does Tom do?  Threatens to dump Will if he so much as punishes Andy in any way.  No repercussions. No discussions.  Nothing.  Which is basically telling the kid that he can do whatever he wants and not to worry because he won't be held accountable.  In other words, it's okay for Andy to turn out to be as big of a brat as Braden.

I normally jump on books with kids in them.  I am a big fan of books about family.  This one was a huge disappointment in so many ways.  Also, for an author who normally only writes M/M erotica (with titles like In My Best Friend's Butt, My Horny Stepson and Butt Burglar... I kid you not) the one and only sex scene in this book is off-page.  I guess this was the author's way of going in a complete opposite direction from his other work.   I also have an issue with a parent calling their child names in anger.  At one point Will actually, in his head and not out loud thankfully, calls his son a bastard.  Brat is used often... out loud.  This is written as an almost HEA but I have to say HFN because of Tom's earlier stance on fidelity.  This is not a couple that I could see making it.

Overall, this book was obviously not for me.  The cheating and abuse already had me disliking both main characters so that may have jaded me in regards to the rest of it but I don't think so.  I could have marked this as 'read' and moved on but I was too bothered to just let it go.  It's doubtful I will be reading more by this author.