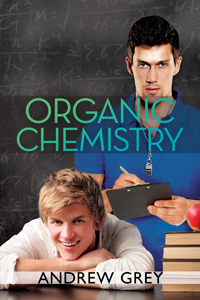 Brendon Marcus is a genius.  At twenty-three he has already gotten his master's degree and his doctorate and is a new professor at Dickinson College.  His genius mind doesn't work like most folks.  He doesn't get humor or sarcasm and he tends to take everything literally.  This is who he is and what he knows.  An only child, he had been doted on by his late parents and not allowed to be a normal child.  Formulas and science... that's what he knows.  As a result, his social life is nonexistent and he has no friends.  People don't know how to take him and his lack of understanding in regards to basic emotions makes him come across as different, odd.  Until he meets Josh Horton.

Josh is the new assistant football coach at the college.  He is openly gay and after literally bumping into Brendon he pursues him.  The two men are as different as night and day.  Josh is outgoing and personable where Brendon is shy and awkward having never been taught how to interact with people on a basic level.  Brendon has never been with anyone nor has he even been kissed.  He understands the mechanics of sex but he's never experienced it or even come close.

"No one's ever kissed me except my mother, and that was, well, my mother."

"You're the first person to really kiss me," he answered, turning a bit red, and then he smiled.  "So, no, I've never done the dance with no pants."  Brendon began to giggle.  "I saw that on television once.  Did I use that right?"

For some reason the head of Brendon's department despises him and makes it his mission to make Brendon look bad even if it hurts the university as a whole.  He wants Brendon gone and Brendon doesn't understand why.  This man goes out of his way to destroy him and his reputation even going so far as not giving him correct dates for critical deadlines.  The man is a jerk in every sense of the word.  Luckily,  Brendon and Josh are slowly getting closer and Josh is there to protect Brendon.  It takes the two men working together to do what needs to be done.

I fell in love with Brendon right off.  He's such a nerd genius and the reader can't help but to feel sympathy as he tries his damndest to understand his feelings in regards to Josh.  Josh is the epitome of patience.  He has fallen for Brendon and will do anything in his power to let him know what they feel for each other is real.  Slowly Brendon develops a personality that does not focus strictly on science.  Watching Brendon and Josh as their relationship developed was a true pleasure to read.  The way everything comes together is perfect.  Another great read by Andrew Grey.

This book was provided by Dreamspinner Press in exchange for a fair and honest review.
Posted by Cindi at 18:16