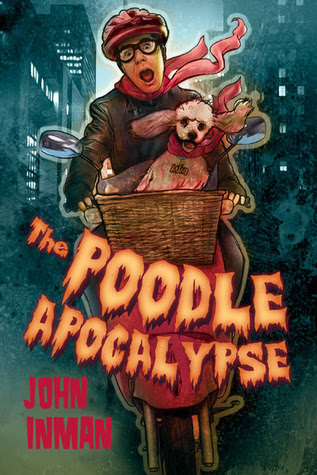 Another hilarious tale by one of my new favorite authors.

The world has been taken over by zombies.  They remain hidden in places unknown until they decide to come out and play with our two main characters, Charlie and Bobby.  The zombies are slow and not very bright so it doesn't take much for the men to dispose of them one by one. Then there is a matter with the weather.  It may be snowing hard one minute or hot and steamy the next.  There is also a huge hail storm that destroys everything in its path.  As far as Charlie and Bobby know they are the only humans still in existence. When what is now known as Dead Tuesday happened (the day the world ended as far as Charlie and Bobby are concerned) it all started with the blaring of a car alarm outside their window.  Suddenly there were empty cars, empty streets and no sign of life outside of Charlie and Bobby.  Then the power goes out and the real problems start.  What will Bobby do without his blow dryer?  And Charlie without his cappuccino?

Not long after Dead Tuesday, the zombies start making an appearance.  Not little ones either.  All are big and ugly.

"I don't know why we couldn't have our lives threatened by a nice midget now and then.  Or a third-grader.  Or maybe some feeble ninety-two-year-old grandmother with a walker.  But no.  All our homicidal visitors looked like lumberjacks.  Even the girly visitors were brawny and mean.  Back before the world went to shit, those girly visitors must have been cranky motorcycle chicks with leather boots and spiky hairdos, who never got laid because they were just too damned ugly, which I suppose would go a long way toward explaining their nasty attitudes now that they were, for all intents and purposes, as dead as mackerels."

Then we meet the zombie poodle, Mimi, who makes an appearance at a most inopportune time. The French poodle still has remnants of pink about its haunches where the mistress (or gay-as-hell master) had had the unfortunate animal dipped in whatever the hell it is rich people use to humiliate their poor beasts and turn them various colors of the rainbow.  The poodle is evil but Bobby takes a liking to it so they end up with a zombie poodle pet.

On stolen mopeds (Bobby's is hot pink with a scarf to match) the two men make their way around town stealing food from the empty stores and basically trying to survive.  Then Bobby goes missing and Charlie's world falls completely apart.  With Mimi the pet poodle, he jumps on Bobby's pink moped, dons the pink scarf and embarks on a search to find his man, encountering every kind of zombie animal one could imagine in the process.

Anything I say beyond that will give it away so I'm stopping there.

This book has the classic John Inman humor that I have grown to love with each book of his I've read.  There are laugh out loud moments as well as a few serious ones.  The way everything comes together at the end is perfect for this little story.  Another entertaining read by John Inman.

This book was provided by Dreamspinner Press in exchange for a fair and honest review.
Posted by Cindi at 16:06