An excellent start to a story turned into a major missed opportunity. 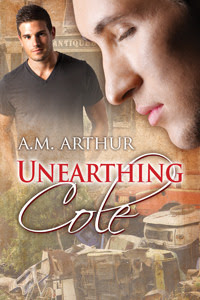 Cole Alston swore he'd never return to his small hometown of Franklin, North Carolina. His father died two years prior and after a bitter argument with his mother after the funeral he walked away and never looked back, completely cutting off all contact. When she too passes away he is not only forced back home but forced to clear out years of junk from the home and the large property. Both of Cole's parents had been hoarders for decades and the home and property is overflowing with everything imaginable.  Cole's plan is to clear everything out as quickly as possible so he can leave town and move on.  He has been running from an abusive ex since his father died and he knows that he is barely one step ahead of the other man.  He has to keep moving before he is found again and staying in one place for too long is not an option.  He has been running for over two years.  Selling the family property will be his ticket out of the country and hopefully away from Martin, the old lover.  He is not prepared for the disaster awaiting him at his mother's home.

Jeremy Collins owns an antique shop in Franklin.  He knew Cole's mother well and had been trying to get her to sell items to him for years.  She wouldn't budge.  When she passes, Jeremy shows up at her home and suggests a business arrangement:  Jeremy will help Cole clear everything out with the condition that Jeremy is allowed to buy or sell everything that has accumulated.  This will also help Cole to make more cash for when he is forced to skip town to avoid Martin.  The arrangement starts off well for both men.  Cole has much needed help in clearing everything out and he is making money in the process.  Jeremy is able to find antiques to sell in his shop and to his many customers.  What neither man expects is to feel immediate attraction for the other.  Cole is gay though he never came out in his hometown.  Jeremy is bisexual having even been married to a local woman years earlier.  No one in Franklin knows about his attraction to men.

Cole and Jeremy begin a friends-with-benefits arrangement.  Jeremy knows Cole will be leaving but he takes his chances by entering into this arrangement with the other man.  It works in the beginning but it's obvious that Jeremy is starting to want more than just sex and friendship.  Cole refuses to acknowledge this as he knows that he has no choice but to keep moving.  Martin almost killed him two years earlier and it is only a matter of time before Martin discovers where he is.  His constant fear prevents him from feeling anything other than sexual feelings toward Jeremy.

Martin makes an appearance as expected.  The resolution in that regard was uneventful and extremely unrealistic.  Cole had been beaten (both physically and emotionally) for over eight years.  He has been on the run for over two.  Martin had tried to kill him on more than one occasion.  He shows up in Franklin and gives a quick sob story and all is well.  Cole doesn't forgive him but he is suddenly able to forget everything the other man had done to him.  I don't buy it.

Then there is the ending and this is where I had my biggest problem.  Up until the end this would have been an easy 4 or 5 stars for me on Goodreads.   I was enjoying the story.  I loved both of the main characters.  I loved the back stories of each.  But the more the book got toward the end the more everything started going downhill.  The Martin thing for one but I got over it for the most part.  Then we get to the actual ending.  Cole no longer has to run.  Martin is out of his life (hopefully) forever.  He can now get settled in one spot without looking over his shoulder constantly.  He and Jeremy begin a conversation about Cole possibly staying in town and then it just stops. Nothing else.  There are no I love yous, no declarations, no anything.  Just an "Okay, Martin is out of your life.  You no longer have to run.  Maybe you'd like to stay with me for awhile?" I'm paraphrasing of course but you get what I'm saying.  I honestly felt that the author simply got tired of writing and just stopped.  There is no real resolution between Cole and Jeremy.

One of my biggest pet peeves is when I read page after page after page of a book only to have everything come together in one or two paragraphs at the very end.  But at least with those books the characters do get their happily-ever-after.  This definitely has a happy-for-now ending.  I have read a lot of books with HFN endings that I was happy with.  In this case I honestly feel like the author just stopped at random.  Nothing was resolved. Nothing was decided.  Just nothing.  I feel like the book ended at the end of a chapter and the author just refused to throw in another one.  It's unfinished and it's unsatisfactory.

This is my second book by this author.  The first one also ended quickly and without much resolution.  I'm sorry to say there will not be a third for this reader.  I read books to see everything come together at the end not feel as if I am being cheated.  I definitely feel cheated with this one.  However, if in the future there is a sequel to this book with Cole and Jeremy, not other characters mentioned randomly in this book, I might reconsider.

This book was provided by Dreamspinner Press in exchange for a fair and honest review.
Posted by Cindi at 21:03