Something to Believe In, Sloan Parker

A Christmas short that tugs at the heart.

"Sean Timothy Weber, if you walk out of here now and keep being a disgusting little faggot, don't you ever bother coming back."

Two years ago these are the words from Sean's mother that drove Sean away from his family home in Ohio. Sean is a high school drop-out and for a while he waited tables and lived with some other people, but he lost his job and place at the apartment four months ago, and has lived on the streets since. Cold, lonely, sad, selling his body in order to pay for a meal, to survive day-to-day -

Even after all this time, they were the same words that seeped into my mind whenever I found myself on my knees in a public men's room. 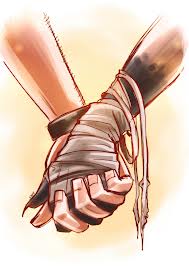 One Christmas Eve he ends up at a local homeless shelter, and while there is no room to stay he gets to have a hot meal. There he sees 'biker boots' laughing at how quickly he is eating his meal and showing general interest in Sean from across the room. Sean leaves after his meal. Out into the cold again, with nowhere to stay, the idea of having to service more men all makes him feel overwhelmed and aimless with little hope for much of a future. So he thinks about 'using,' get's offered, but 'biker boots' comes along and dissuades him, and makes a connection -

"What's you name?" I opened my eyes at his whispered words. He was still staring at the doorway,
"Sean, yours?" I didn't think he was gooing to answer.
Then he finally said, "Gavin."
And with that one name, I was no longer alone.

Fast forward a year, and Sean and Gavin, aka 'biker boots,' are now solid friends. They both sell their bodies and seek out a living on the streets, but they look out for one another. Until one week Gavin goes away with an older man and comes back with good money which allows them to share a cheap motel room for a week leading into Christmas. It's here they discover a lot more about one another, share their feelings, which they've both kept inside, that Gavin wants to protect Sean, sees him as salvageable...but not himself. It is a catlyst for change.

Something to Believe In is only about fifty pages, and Sloan Parker uses every one of those pages to give you a feeling of the despair at being young and not having much to look forward to. How easy it is for someone to find themselves in that position. How cruel family can be and paradoxically how loving family can be. I wanted to hold onto both Sean and Gavin, tell them things would be okay, I felt angry at Sean's family but ultinately there was also hope.
﻿
﻿

I thought that Something to Believe In was a good read leading into Christmas. It makes you think of family, whether that be good or...difficult. I hope it helps people empathise about the plight of the homeless and how easy it can be to end up on the streets. There are young people out there who should be sleeping safely in a bed and having a family to love all year, giving them something to believe in, and yet, that isn't always the case. If you are wondering this book is light on sex but Sean and Gavin are sweet and their time together in the motel is romantic amongst the backdrop I've outlined. It is all well written and does have a HEA. I highly recommend it for a tug at the heartstrings, some hope, and love.