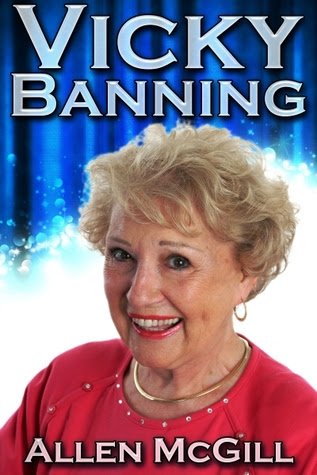 Vicky Banning is not your average seventy-three-year-old woman.  Nothing about Vicky could ever be called typical.  She lives her life and she lives it to the fullest regardless of what others think.  She's loud, can be a tad overbearing and others be damned.  She never intentionally hurts anyone... unless, of course, they deserve it.  She hates liars, cheaters, and fake people. If she comes across one she will call them out but not always publicly.  She has her way of making sure that bad people get what's coming to them.  The way she does this is priceless.  She may pose as a drug dealer, a Madam or even a cheesy journalist but she will do what's right.

Vicky moves into Sanctuary, a home for older folks that caters to a more wealthy group.  She knows going in that her time will be limited but her reasons for this do not come out until much later in the book.  While living at Sanctuary, she meets an eclectic group of people. There are Roger and Steve, a gay couple who do not live there.  Doris, the manager/everything at the building.  Then there's Sarah, a former mayor's wife who feels that she rules the manor, so to speak. There are others of course but none like these three.  Roger is the interior decorator that Vicky hires (with the help of Doris) to redecorate her room that "was a riot of ruffles!  Pink ones!  Everywhere!  It was if the room had been smothered by a graduation dress."   Vicky inappropriately inquires about Roger's sexuality.

"Oh!" Vicky exclaimed and chuckled at what she'd been thinking.  She studied him more closely.  "But you don't look gay!" she said, with accusing brusqueness.

"No one, darling," said Vicky.  "But all my decorator friends--the best ones at least--are all gay...some of them real screamers.  So?  What's your story?"

Vicky is in no way PC.  The book is set in the eighties so the words 'politically correct' had not yet been made mainstream.  Not that it would matter.  Vicky is going to say what's on her mind regardless of what others think.  She's that kind of gal.

Vicky and Roger become close friends pretty quickly.  Roger never does actually use the word gay but he does have a male partner, Steve, who has a connection to Doris.  This connection is interesting to say the least.

While living at Sanctuary, Vicky becomes quite popular with some because of her antics and hated by others as a result.  But in the end it's all about Vicky wanting to do right in the world even if it embarrasses a few along the way.  She comes across as open and a bit loud, but no one really knows Vicky.  She keeps a lot of secrets about her personal life and her past.  Some memories come out during some of her weaker moments but all in all, her life is held close to the vest.  With her time being limited at Sanctuary, she must do all she can to live her life during those few months to the fullest.  There is casino night to raise money for charity where Vicki performs as a stripper.  She goes into sweet grandmother mode when she meets a little boy who is being forced to give away his beloved puppy.  She brings two exes together so that they can go back to being the friends they were before they married.  She cons a cop, a diner owner, a shop proprietor and others and even makes sure a drug dealer is shut down so that he can no longer sell to children.  While some of her antics may come across as being sneaky... wrong.. in the end it is all done for the right reasons (in Vicky's eyes anyway) and everything is made right.  Her family secrets come out at the end and I was happy with the way that played out. Not what I was expecting which I am sure is the point.

This is a delightful read.  I was laughing out loud before I even got to 2% on my Kindle and I continued to do so until the very end.  Vicky Banning is an entertaining woman. She's loud, boisterous but inside she is a genuinely kind human being.  Never would she be called the "grandmotherly type" because of her adventures and personality but once you see her with her family your heart will melt a little.  Mine did.

This is not my normal type of book though it does have a gay couple in it that plays a big part. However, had I not read this book I would have missed out.  An excellent book with an amazing cast of characters.

This book was provided by the author in exchange for a fair and honest review.