Roughed Up (Up to Trouble #3), Hank Edwards


A terrific rollercoaster ride - from sexy to scary - that had me wanting to read it all at once. 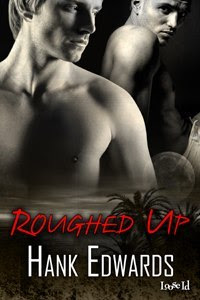 In Roughed Up, Pearce (Aaron) and Mark are in Barbados on vacation. They are enjoying all they can as much as they can on a budget and in a country that does not look favourably upon homosexuality. For a all the fun they are having, they do make the most of the beach in sexy ways, Mark likes the idea of doing more than just the standard touristy things. He wants to experience the authentic flavour of Barbados a bit more. So they head off into Bridgetown. While entering a restaurant, Mark notices a girl that reminds him of a someone from his school who was a couple of years ahead of him. On a trip over to the Caribbean in her final year of school Summer  disappeared, never to be heard of again. The girl is with a suspicious looking guy and she looks like an addict, possibly a hooker - so a bit thin, messed up - but she looks like the girl he knew....but perhaps not. Even when they leave Mark cannot get Summer out of his mind, or that blonde girl. He would hate it to be someone he knows or a family member and no one did anything for them. Besides he felt she was trying to say something to him and he just can't let that go.

Pearce lets Mark persuade him into going back to Bridgetown, but this time to the local pub, to see if anyone knows anything about the girl Mark is worried about. No one claims to know anything. It's a rougher area and nobody's saying anything to two foreigners about it, even if they do know. They leave, but Mark is still thinking about it, worrying. Pearce and Mark get into an argument about it the next morning at breakfast - Mark feels Pearce is being uncaring, and Pearce feels Mark is letting something they can't do much about ruin a good holiday. Mark up and leaves, Pearce figures Mark will get over it and he lets him have some space. However, the day is slowly coming to a close and Mark is nowhere to be found. The reader knows that Mark has been kidnapped, drugged and taken by sex traffickers. Pearce feels maybe Mark has become sick of him - relationship doubts creep in - and left, but when he finds Mark's wallet, money, passport all in place he knows something is very wrong -

The book goes into overdrive from here as Pearce encounters problems and is frustrated at every turn. The reader also sees things from Mark's perspective, his experiences at the hands of the traffickers. How scared he is, how brave he tires to be, and how he tries in vein to escape. Mark's fear is palpable. Pearce's fear is also well relayed  - feeling incapacitated by foreign policies, attitudes, being a suspect, not having any jurisdiction when he is used to taking charge of something. This time it is very personal, and Pearce does all he can to find Mark - worried about the worst, hoping for the best. The suspense is played up well, the fear of what it would be like to have this happen to you or someone you know makes it easy to cringe when Mark's POV is on page -

The hard barrel of a gun was jabbed against the base of his skull, and a man with horrible breath whispered in his ear, "I don't care how many cars are driving past. I will shoot you right here and then go inside and rape every one of those girls before I put a bullet in each of their heads as well if you do not stand up and go back to the house. Is that clear?"

What I like about this series is the action, the way Hank Edwards works on the developing relationship of the main couple in a relatable way - there is passion, there is humour, there is miscommunication, misunderstandings, flexibility required. There are also the very real still-getting-to know-someone-fully moments. Doubts, could it be more about the sex? These two men are different - Mark is more laid back and tends to see the positive whereas Pearce is more cautious, stern, and jaded in a way working as an FBI agent would impact you. The way it is written is excellent and lends credibility to the story. I also liked the social commentary weaved into an entertaining piece of fiction.

This book is definitely a book of two halves. The first part is sexy, humorous, building on their relationship, with all it's myriad flaws...and love. The sex is smoking hot, which is not always the case when you are reading about the same couple. I love Pearce's sexy talk. The realisation that sex with someone you feel a connection with is more powerful than one night stands. The second half is the suspense, action and white-knuckling part.

Roughed Up is the best book of the three in the Up To Trouble series. I'm truly not fond of following the same MC's throughout a series, I get bored as the chase and catch has left the relationship. Here it is stronger than in book #1 and to me that alone is good writing. Okay, Pearce and Mark get into all kinds of trouble, they're like the Jessica Fletcher's of the LGBT fiction world, but it's great watching them work the crime and their relationship. That's what this series is all about. This time around the situation made for a real rollercoaster ride.