The Mingled Destinies of Crocodiles and Men, Eric Arvin

A beautifully written, unique story by one of my favorite authors.

I went into this book not knowing what to expect.  Eric Arvin's books can never be considered more of the same.  Each has a uniqueness that is rare in the books that I read.  I admit to a bit of confusion during the first 5%.  There are so many characters introduced and the stories behind them and the world they live in that I felt that I would have a problem keeping up.  I couldn't have been more wrong.  Before I knew it I was totally engrossed in the story and could not read it fast enough.  Any initial confusion disappeared the more I read.  Don't get me wrong, there are a lot of things going on at once and the reader does need to fully concentrate in order to understand who each character is, the worlds in which they live in and where the story is going.  But once you get started, I guarantee that you will have a difficult time putting down your Kindle even for a little while.

The story takes place over a period of years.  Minerva True is a mystic and a River Dweller.  She alone sees the danger of a specific area of which an old chapel resides.  Passed down from mother to child for generations Minerva has abilities that others can only dream of.  It is Minerva's duty to protect those from the danger of the chapel and Dark Eyes, an entity that for years has been bent on destroying all who dared venture on the chapel grounds.  The chapel is avoided by valley and river residents alike as all who go knowingly or unknowingly are lost, never to be seen or heard from again.  There is a sense of evil that is constant.  In only a matter of years most who live near the river either leave the area willingly, never to return, or are drawn to their deaths on the chapel grounds. 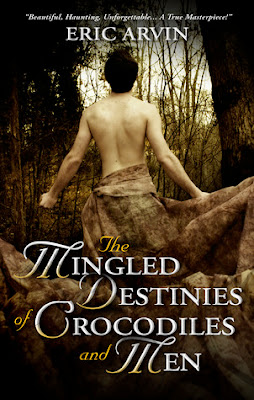 There is the cast of characters, both main and secondary, who either fight with Minerva or against her.  Calpurnia, whose sanity constantly remains in question.  There is more to Calpurnia than simply her lack of sanity.  Much is revealed as the story plays out.   Her son, Leith, who is bound by duty to take care of his mother regardless of his own feelings toward her and her lack of motherly love toward him.  There is Aubrey who is Leith's friend and later, his lover. Aubrey's past is unknown but it's obvious (at least to Minerva) that he will serve a high purpose when the battle to rid the area of Dark Eyes and his minions begins.  Then there is Deverell, born Elijah, who becomes a brother to both Aubrey and Leith and a surrogate son to Minerva.  There is Hamilin Marsh who residents turn to in need of leadership. There is Dark Eyes, a preacher (though I use that term lightly) who is the force behind the evil of the chapel and its surrounding property.  He, along with others before him, keep the evil and danger alive.

Early on other characters are introduced who are integral to the story as a whole:  Garet and Darcy, best friends and secret lovers who each go on to marry females and have sons, to the pain of the other.  Darcy to Lara, Calpurnia's best friend, who later has Elijah/Deverell.  Garet to Calpurnia, who has Leith.  Minerva's daughter Branwenn.  Each character is critical to what will occur later in the story.  The evil must be banished and in the end only a small number is left to fight.  There is sadness throughout.  There is the sweet joy of friendship and brotherhood between Leith, Aubrey and Deverell though with Leith and Aubrey the friendship is much more.  There are various creatures who live in the woods who serve as protectors and allies. There are also creatures and vines that protect the old chapel and its inhabitants with crocodiles guarding the entrances.

I could go on and on about this book and still never have it make sense to the reader. My words alone could not do it justice.  So much happens that one would have to read the book in order to understand it.  The battle between good and evil is a long one.  The fight is brutal and some beloved characters may not survive,  but in the end goodness overcomes the bad and while the happily-ever-after is anything but traditional, it is there in a sense though not in the way one would expect.

This is not your typical M/M love story so anyone going into it expecting that will be disappointed. Traditional romance or not I found this to be one of the most engrossing and unique stories I have read in a very long time... if ever.  Eric Arvin has woven together a tale so unique and with such an intriguing cast of characters that I could not turn the pages of my Kindle fast enough.  I was eager to see what would happen next.  With each chapter more is revealed and the reader is carried even further in to the world of good versus evil.  I absolutely loved it, as I have every other book I have read by this author.

If you are looking for an outstanding book that is full of surprises, I highly recommend The Mingled Destinies of Crocodiles and Men.  If, however, you are looking for a traditional romance or more of the same, I don't.  This book is anything but typical and for that I am grateful.

Another outstanding read by Eric Arvin.

The cover is probably one of my all time favorites. Absolutely gorgeous.

This book was provided by Wilde City Press in exchange for a fair and honest review.