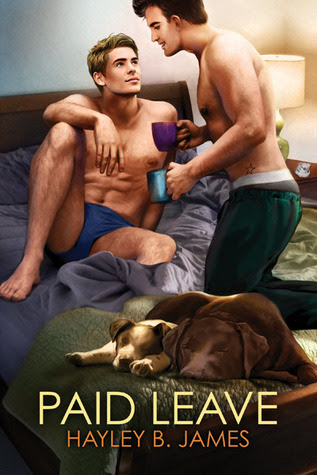 ** This review will be one massive spoiler.  Keep that in mind before reading. **

The Albuquerque police department is taking a lot of hits.  There have been several officer involved shootings over the past year and the media is destroying the individual officers as a result.  Though the shootings are in every way justified, the media (one print reporter in particular) blames the police and makes it their mission to destroy each officer by printing all there is to know about his or her life and by making the criminals look like the good guys.  Charles is one such reporter.

Benji Miller is a closeted cop.  He has done so well with hiding his sexuality that he easily comes across as straight with his coworkers and friends.  After yet another officer involved shooting, Benji is forced to allow Charles to do a ride-along with him during one of his shifts.  Benji knows that all Charles is looking for is something bad to print so he's careful with every word he speaks and everything he does.  Unfortunately, Benji's sexuality is not as hidden as he would like to believe and Charles immediately picks up on it.  The only saving grace is that Charles is also in the closet.  Knowing it's stupid and knowing it's the worst thing Benji can do as far as his personal and professional life is concerned, Benji begins a secret sexual relationship with Charles.  Charles has made it his professional mission to destroy cops but yet Benji jumps into bed with him anyway. Often. Thus begins my lack of love for Benji.  Not only does he put his own career in danger by sleeping with the enemy but he puts those of his fellow cops in danger as well.  Charles is a horrible human being (regardless of how the author tried to play him up as not quite so bad) so all it would take is one comment during the heat of passion and Charles will have the ammunition that he wants to print another scathing article about Albuquerque's finest.  The fact that he too is in the closet means nothing.  One comment is all it would take.

The secret relationship with the reporter continues until Benji himself is forced to kill a suspect who is putting civilians in danger.  He is forced to take paid leave until the powers-that-be decide that the shooting was justified.  He must also stay hidden away a bit so as not to give reporters more ammunition, Charles included.  Of course Charles is the first to write an article about how horrible of a human being Benji is.  Their relationship is strictly about getting off with no feelings involved so there are no qualms in trying to destroy the other man's life.

During Benji's paid leave, he discovers Beans, a small coffee shop.  He also discovers the owner of said shop, Neal McCoy, who is openly gay and has never seen the inside of a closet.

There is immediate attraction between Benji and Neal and even knowing that Benji is playing pretend-straight-guy Neal allows himself to begin a sexual relationship with the man.  In the beginning, I could see it.  Later, I could not.  As the two men gradually become closer, it is quite obvious that not only is Benji planning to stay in the closet for the rest of his life but he is ashamed of who he is.  This in turn leads to him being (in my opinion) ashamed of Neal.  I lost count of how many times the words Run in the opposite direction! ran through my mind while reading this book.  Neal is much too good for Benji and I am not just referring to Benji's refusal to come out of the closet.  There is zero communication between the two men. Neal tries.  He eagerly discusses everything from his family to his wants and needs.  Benji never discusses anything about his life, his profession, or his feelings for Neal until much later.  It's obvious that Neal is nothing to him but a convenient fuck buddy.

My issue with Benji is not the fact that he is in the closet.  I understand that with his profession showing up on shift wearing a t-shirt with a rainbow flag on it would not exactly endear him to other officers.  My issue with Benji is Benji.  He treats Neal poorly and can't understand why his openly gay lover doesn't understand his need to be Mr. Manly Man Straight Guy all the time... even in the privacy of their own homes.  Sure there is a lot of sex between the two but Benji refuses to acknowledge that he is gay even after saying he loves Neal.  Neal's best friend Kyle is introduced early on.  Kyle is more out than Neal if that's possible.  I loved Kyle immediately.  I found myself rooting for Neal and Kyle as a couple........... not Neal and Benji.

It takes a L O N G time for Benji to allow Neal to see his home or even know his address. He keeps Neal neatly hidden away from every aspect of his life.  He is even selfish in the bedroom. He refuses to give Neal blow jobs though he is quick to accept them.


"Return the favor." Benji placed himself back into his jeans (after Neal had given him a blow job).

"If we count from the night we walked the Brosque, we've been seeing each other for five weeks.  In that time, you've never seemed interested in returning the favor." Neal walked back to Benji and kissed his neck.  "I never asked because not all men like it, so why are you offering now?"

Benji pressed his palm against Neal's jeans.  "I was offering a hand, not my mouth."

Of course he was.  Selfish much?  I mean he did just willingly drop his pants for one from Neal. He didn't exactly try to push him away.

All is not Benji, however.  I also had an issue with a few other things in this book.  Charles for one.  The reader is not supposed to like Charles.  I totally get that.  He is an easy character to hate.  But I felt that introducing him and having him disappear was a missed opportunity.  Also, there is Neal's mother.  Neal's mother who is very much aware of the fact that Benji is in the closet at the police station and the reasoning behind it.  So what does Neal's mother do?  Instead of waiting for her son to introduce Benji to her, she shows up at the station and outs Benji to the officer at the desk as the man who is dating my son.  This is also after a conversation where Benji makes it clear that he has no intention of ever meeting Neal's family.

"I don't." Benji stood up to clear breakfast from the table. "I also don't want to meet yours."

"That's what you do in a committed relationship.  You meet the family." Neal followed him to the sink with the empty mugs. "I understand that just over two months is a fast committed relationship, but it's no less real.  I love you and I want you to know that part of my life as well.  I see and talk with my parents regularly."

There are the typical homophobic secondary characters.  I completely understood where the author was going with them (with the exception of one) so I had no problem reading about them as they added to the story.  One thing I did have a problem with, however, and it is more of a personal thing.  A homophobic person (who is not central to the story in any way) is introduced late the book and makes his/her feelings known.  The part that bugged me?  The author did not just allow the character to make the homophobic comments but she made a point in saying that this person was wearing a cross.  Had the book been about Benji being in the closet due to religious beliefs this would have probably gone unnoticed.  It wasn't.  Contrary to popular belief, not all Christians are anti-gay so I felt that particular detail was unnecessary.  Instead of going off on something that has nothing to do with the story, I will say nothing else in regards to it.

The ending was nice and Benji and Neal finally get their happily-ever-after.  However, the entire book is about Benji refusing to come out of the closet.  When he does?  A complete nonevent.  There is also talk throughout about his family not accepting him and how they would react if he came out as gay.  Nothing is mentioned about how they reacted to their son's homosexuality when it was out in the open.  Did he tell them?  How did they react?

When I go into a book it is a given that I must ... if not love... understand the main characters.  I felt zero love nor understanding for Benji.  I disliked him from his introduction and this dislike carried all the way to the end.  It is a given that if I do not like one of the mains that the story will not work for me as a whole.  For that reason, Paid Leave did not work for me though I adored Neal and Kyle.