The Boy Who Came In From The Cold, B.G. Thomas 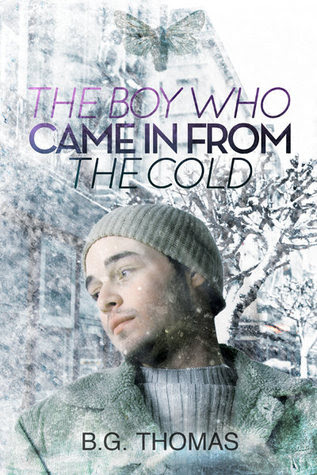 Todd Burton has run away from the small town of Buckman.  He has run away from an abusive stepfather and a mother who stands by and allows the abuse to happen.  He runs to Kansas City in hopes of being trained in culinary skills by a famous television chef.  Of course, she laughs him out of her restaurant (naive much?) and he is forced to use what little savings he has in order to survive.  Unfortunately the savings doesn't last long and he is evicted from his rundown apartment during the biggest snow storm of the year. Standing inside the lobby of an apartment building, he meets Gabe Richards.  Gabe immediately sees Todd as a hustler but he helps him anyway.  He brings him food and coffee and even makes the mistake of propositioning him for the night.  Todd takes offense as he is definitely not gay (uh huh) and he says some pretty homophobic things to Gabe and Gabe leaves him to it even if it bothers him to leave someone who seems to desperately need help.  Not long after Gabe disappears back to his apartment, the building manager is on Todd and knowing he can't go back out into the blizzard, he lies about being Gabe's boyfriend.  The manager takes him to Gabe's apartment to verify the story (which Gabe does to be nice) and this begins the relationship between Todd and Gabe.  One (innocent) night turns into a week and then much longer.

This book started out well.  I felt immediate sympathy for Todd and I liked Gabe right off.  It took me seeing the name Bianca for it to click in my head that I have read about Gabe before in Bianca's Plan.  Once I refreshed my memory on that story a bit I was even more eager to see how this one would play out.

This review will be laid out a little differently from my norm.  I will begin with the cast of characters, saving Todd and Gabe for last.

Tracy - The token female friend (of Gabe) who is a nosy, busy-body who feels that she alone knows what is best for her friend.  She betrays confidences.  She goes behind Gabe's back and tells tales that are not hers to tell.  She is Gabe's coworker and so-called confidant.  That last part I could not understand.  If you know that the person you are sharing secrets with will turn around and repeat everything you say, why bother?  She does it all the time so do you think that maybe this one time she will actually not blast your personal business?  She does this in the name of helping Gabe but the fact is, it's not her place.

Peter - Peter is an extremely wealthy older man who took Gabe in ten years prior and gave him a chance when Gabe thought there were none.  Peter likes to show up at Gabe's place randomly and without warning with no thought of whether or not Gabe (and Todd) have plans, one time even inviting himself to dinner that was specifically planned as a romantic dinner for Gabe and Todd.  He (Peter) will not take 'no' for an answer regardless of how the others feel about his visit.  He is also prone to quoting literature, at times using old cliches.  This (the quoting) was refreshing at first but got tiring quickly.

Todd's mother and stepfather - Todd ran away from his family home to get away from the abuse of the stepfather who made it his mission to degrade Todd at every turn, constantly calling him a faggot or queer even though Todd had not come to terms with his sexuality at that point.  In fact, Todd was convinced that he was straight, even going so far as to have a long-lasting sexual relationship with his childhood female friend, Joan.  Todd's mother sat back for years and allowed Todd to be abused, never once stepping up or speaking up.

Daniel - Gabe's ex who is only spoken about in the book. He never actually makes an appearance.

Brett - A boy (I mean that literally) who Gabe had fallen in love with two years earlier.  The story behind Brett is when my opinion of the book went from "very nice" to "just ew!"  There is a major creep factor for me with the Brett story. I found it to be disturbing on more than one level.  There was no coming back after Brett and Gabe's story is revealed.

Gabe - A wealthy businessman who had been picked up (by Peter) ten years earlier after hitting rock bottom.  He claims to have a "hardened heart" but it is revealed that he, in fact, falls in love rather quickly as is proven by Daniel, Brett and later, Todd (and also in Bianca's Plan, a book that takes place a few months earlier to this one).  It is stated that he is much older than Todd but I do not recall his actual age being given at all in the book.

Todd - A naive twenty-year-old who has been taught his entire live that homosexuality is an abomination so he has pushed those urges back even having a not-so-satisfying sexual relationship with a woman (Joan, who later betrays him in the worst way).  There is also Austin, Todd's former best friend but there is not much to say about him other than he also betrayed Todd and was the ultimate nail in the coffin as far as Todd leaving his hometown.

As mentioned above, this book started out very well.  I loved Todd right off and I found Gabe to be charming.  This is your classic Cinderfella story where the wealthy man takes in the poor, homeless one.  I'm not a fan of insta-love (by any means) but I could almost see it working in this case even if everything (pretty much the entire book, minus the Epilogue) takes place over the course of a week.  Everything was going along well.  I was pretty much set on this being a 4 star review.  Instead, it dropped a star when Gabe's history with Brett is revealed.  I have read other reviews where other readers had the same issue with the Brett situation as I do so this should not come as a surprise.  I personally did not get it and to be honest?  I'm not sure I want to.

Todd has to come to terms with the urges that he has for Gabe, a male, after being taught his entire life that two men loving each other is wrong.  When he does come to terms with his sexuality, it happens rather quickly. One moment, he is feeling guilt and the next he is willing and eager to have as much sex as possible with Gabe.  Don't get me wrong, there is not a lot of sex in this book but there is enough for me to shake my head a bit at Todd's immediate about-face.

The other cast of characters (listed) play a somewhat major part in the story of Gabe and Todd though I would have been thrilled had Tracy never been introduced but that's just me.  Todd discovers things about his mother and stepfather that helps him in the long run (thanks to, and I say this grudgingly, Tracy who betrayed yet another confidence in order to obtain this information). Peter also steps in and does something pretty amazing for Todd as well.

Overall, a nice story that I feel could have been better had the story of Brett been written differently. The Epilogue is necessary and I'm glad the author took us a year or so down the road.  Had the book ended without one, I would say this had a HFN ending. The Epilogue allowed the reader to know there is, in fact, a happily-ever-after for these guys.