An interesting, witty read that cleverly uses its title, and then some.﻿

Okay. I'm getting this out of the way first of all. The title reminds me of my parents. It was a phrase they used...a lot. Go 'round to the 'tradesman's entrance' - go around to the back door. Ahhh, new meaning nowadays. Then Dave called Stephen a 'panic merchant,' parents...again AND, one more, 'My stomach thinks my throats been cut.' Not doing too well here for a M/M am I? thinking about my parents whilst reading *shudders* Now that I have that traumatising bit out of the way I'll talk about the ebook.

It's short. It takes a little getting used to. The slang was fine for me. I'm an old Aussie and we have been somewhat tied to England over the years - mother country and all :) let's not forget lots of British sitcoms watched, and plenty of us would travel over and stay in Earl's Court and be maniacs.....  but I digress. 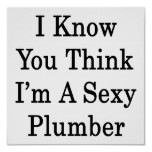 Stephen is writing one of the chapters for his next bodice-ripping novel, having a bit of writer's block at heaving bosoms. And the heroine, Clarissa Hart, is driving him balmy, ha! take that English slang! He had forgotten that his pipes were blocked and he'd organised a plumber to, er, unblock them. Enter Dave, or the Tanned Adonis as Stephen initially refers to him. Dave is the Forrest Gump of tradies. He has a way of likening life and people to biscuits. Long story short, our two protagonists are both gay, there's an attraction, Stephen likes Dave's dimples when he bends over to work, and they end up checking out more than Stephen's kitchen's plumbing. Stephen learns a lot about the human dynamics involved in sex, potential relationships, himself, life and reality really. It does help when writing romance novels :)

This is a funny little ebook. I don't quite know where it sits. It's certainly not what gets deemed as typical M/M fare, no insults meant to anyone with that statement. We all know what I mean. The first person present tense was very well written, not always the prettiest style to use, but well done here. Ms Vale certainly knows how to use the English language. The language and the slang were interesting. As beautiful as some of the wording was, it took me by surprise and I had to adjust -

Stephen stops, realising that he doesn't have to explain his recent interior decorating fit of pique to a tardy plumber....

Meanwhile, a raised-tempo'd tattoo to the temples keeps Stephen informed of his blood pressure status.

The characters were decent guys, although I had to warm to them for various reasons - I felt Dave appeared a bit...smug? Stephen too easily offended. However, I was wrong, and I grew to really like them both. Everyone needs a Dave for their first time - sure, gentle, humorous, patient, laid-back. Stephen, a twenty-six year old virgin in hose (you have to read it), who writes bodice-rippers under a woman's somewhat dramatic pseudonym, was rather, well, cute. He was scared first time, his jaw ached at oral sex, huzzah! ain't that the truth! No plowing fields immediately either. Sorry, I feel I've been cheeky in this review.

For mine, The Tradesman's Entrance is witty, good natured, clever, written by someone who knows far more than the fundamentals of how to write well. And, after the initial getting-used-to-the-style moment I had, I thoroughly enjoyed it. I recommend this for lover's of the English language, those who like British-isms, enjoy an interesting, humorous LGBT read. It's sensual and sexy, but not in the smoke-up-the-pages way. It also has a delightfully hopeful ending. I wouldn't mind a bit more about Stephen and Dave now I know them