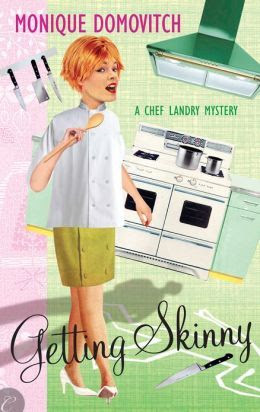 A nice mystery about an overweight woman, a cheating boyfriend, a couple of murders and an annoying best friend.

Nicky Landry is the co-owner of a struggling restaurant, Skinnys On The Queen.  She has a handsome boyfriend of two years who is a physician, Rob.  Her business partner, Toni, is her best friend.  Nicky is overweight and she suffers from self-esteem issues.  But she has Rob, right?  Maybe not.  While hosting a special event at the restaurant to honor Rob and the end of his residency, Nicky discovers that he has been cheating on her with a woman named Mona who just happens to be at the same event... in Nicky's restaurant.  When every is gone, Nicky confronts Rob and ends the relationship and demands that he go back to her house and have everything he owns out before she comes home later.  She ends up staying at the restaurant with Toni drinking and sleeping her sorrows away.  When she arrives at her home hours later, she finds Rob outside her back door dead from one of her chef's knives.  Nicky goes from being the scorned lover to murder suspect in a matter of hours.  The police don't bother looking at other suspects so it is up to Nicky and Toni to investigate on their own in order to clear Nicky's name.  Unfortunately, someone else is murdered and Nicky is thrust into that investigation as well.  Can she find out who the murderer is before she goes to jail for life or worse, becomes a victim herself?

This is a nice mystery.  The cast of characters are all interesting.  There's Toni, Nicky's best friend and business partner.  Toni, I didn't like too much.  Nicky is considered overweight and Toni is the complete opposite.  Nicky has low self-esteem where Toni has enough for both of them.  Toni is the type of friend who goes out of her way to make others look bad whether it be physically or simply to make the other person look or feel inferior.  Nicky had just left the police department after being brought in for questioning in regards to Rob's murder.  Nicky's criminal attorney is Toni's ex-husband.  Instead of being there for her friend during the worst time in her life, she whines and complains about her ex.  This type of thing happens a lot.  She also goes on and on about how "fat" she is and how no one would ever want her.  Toni is tiny and Nicky is not but yet Toni makes these comments constantly in front of her friend.  I personally have an issue with people who do that so maybe I'm biased against her character as a result.  Needless to say, I was not a fan of Toni's at all.

Then there are the other secondary characters:  Jackie Chan, Nicky's Yorkie.  I fell in love with that dog and its antics.  Mitch, the strange next door neighbor who might not be who and what Nicky thinks he is.  Kim, the annoying 'friend' who comes across as the disturbed character in Single White Female.  Then there are the former hospital co-workers of Rob's, the employees at the restaurant, the police personnel and Toni's ex husband the attorney.  Each character was necessary even if a couple of them would try the patience of a saint.

One thing that I felt was overdone throughout the book was Nicky's constant need to use the word fat.  As with the Toni thing, I have a problem with that  for reasons that are my own so I felt that while it may have been cute a couple of the times it definitely did not stay that way.  There is a lot of "Woe is me.  I'm fat.  No one will ever love me. I'm not good enough.." you get the gist. Yes, Nicky is overweight and yes, she had self-image problems but it got to be too much.

The murder mystery turned out to be a somewhat of a surprise.  I was convinced I knew who the killer was early on but I was wrong.  The actual killer is pretty obvious early on though not the reasoning behind the murders.

Overall, this was an entertaining read.  It's not much of a romance so do not read this expecting that.  It is there a little in the background but not enough to classify it as an all out romance book.

This is my first by this author. I  am curious to see where the author takes the series from here.