Under blue moon I saw you
So soon you'll take me
Up in your arms
Too late to beg you or cancel it
Though I know it must be the killing time
Unwillingly mine.... 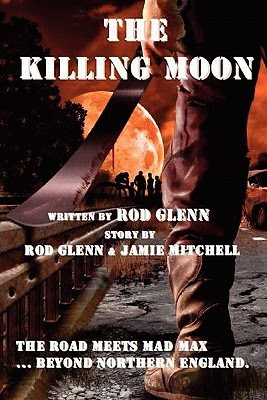 I'm giving The Killing Moon 4 stars for the writing, research, the realism. I believe it is fair to say that it comes across as true in the sense of how horrible things would be, how badly people would behave given the end of our current system. Given WWIII, bio-toxins that turn people into Crazies who bear no semblance of being human. The fact that a sense of true family, and not just camaraderie, is really all you could depend on.

The book does start with a lot of detail that could have been edited down. I didn't mind it personally, I like to know the little things. I'm interested in the whole. I liked the use of Rev 6:7-8. Also song lyrics that I thought were used well. There is some good, feasible information into how the demise of the world we know now could come about. It is totally believable. After the initial breakdown the book follows a group who make it to/or live in Newton, England. Fast forward twenty years and these people have managed to hide and form a community in Newton, but let's face it in times of desperation, chaos, and anarchy nothing decent can last. From here five friends start out on a rescue, of sorts, to the Black City, and pretty much everywhere they turn shit happens, not terribly eloquent of me, but without giving details that's my best description.

There is a heirarchy in the Black City. Pretty much like any time in histroy there are those who are more powerful and more corrupt. Here the Authority and the IC, Industrial Coalition, are, by and large, in bed together. There are also territorial clans and rebels, some side with the Authority/the IC and some are a law unto themselves, making for a complex social structure - where there are two or more people there will be always politics, and those who oppose them.

The book is dark and is not for the faint of heart. In all honesty I will probably never re-read The Killing Moon, but for me it represented an honest look at what could/would happen when a society breaks down. It would bring out a dog-eat-dog mentality, it would produce people that aren't firing on all fours mentally, due to circumstance and events that they have endured - no mental health service here to help anyone out I'm afraid. It would bring out the despots, the pathological sadists. It would simply bring out the worst in people, and good luck to those surviving. Good luck to those who are honest or trying to do right.

I can't fully review the book without spoilers but if you're looking for a gritty dystopian novel, here it is, and it is very gritty. There is death, rape, torture, and it's not off page -

At the sight of the glistening, jagged blade, Paul felt a hot rush in his groin and urine gushed down his shabby trouser legs. Richie was crying hysterically, still struggling in vein against his ties.
"No, God, please, no!" Paul screamed as Tyrus reached for him.....
Holding the blade up in the narrow gap between them, he roared, "SHUT THE FUCK UP!"...
As Paul hyperventilated in tight, wheezing gasps, Tyrus slowly and deliberately ran the honed blade across Paul's light undershirt. the material tore open easily and the soft skin underneath with it. Blood oozed out, dribbling down his heaving chest.
Paul screamed as if his lungs were exploding.

...and this is not nearly as graphic as it gets.

Everything you would expect in a society that is broken down you get. The authors don't shy away from anything. It is depressing. I won't say it didn't end with some hope, but still....I didn't enjoy a lot of the people in this book, there were exceptions where I had an attachment, wish I didn't is all I'll say. But I feel that's pretty representative of how it would be, so I believe that's good writing.

If you're in the mood for a dark, realistic, adult dystopian novel you just might like The Killing Moon.


In starlit nights I saw you
So cruelly you kissed me
Your lips a magic world
Your sky all hung with jewels
The killing moon
Will come too soon....﻿
Posted by kazzak at 05:49