A well-written and entertaining sequel to Dirty Kiss. 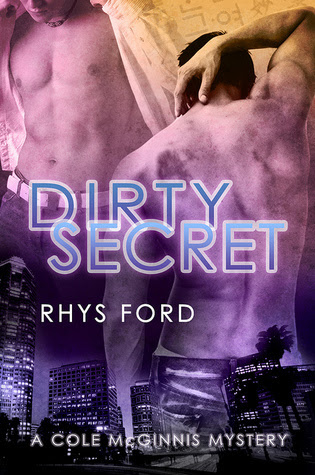 Jae and Cole were introduced in Dirty Kiss, the first in the series, during the investigation of the death of Jae's cousin.  Cole is a private investigator who had been hired by the murder victim's family.  He meets Jae during the course of the investigation.  Cole is openly gay where Jae keeps that part of himself private from the world because of his traditional Korean family.  Homosexuality is not accepted in his culture and the exposure of his secret would have him cast out of the family and shame brought to it.  Jae and Cole began a relationship with each one having their own personal demons.  Cole's partner, Rick, had been murdered in front of him years earlier by someone Cole trusted with his life.  Jae is the first person Cole has allowed in and now because of Jae's family the relationship may end before it has a chance to begin.  It is expected... no, required... that Jae will someday marry a woman and have children.  To not do so is unacceptable.  Cole knows this going in but his feelings for Jae can't be thrown aside.  He's falling for him and will fight like hell to keep him, family obligations or no.

In Dirty Secret, Cole is hired by his friend Scarlet, a close friend to Cole and to Jae.  Scarlet is a transvestite who helped in the investigation in the death of Jae's cousin.  She hires Cole to investigate the almost twenty-year disappearance of a member of her partner's family... though the word partner would not be exactly correct as Scarlet would be considered the man's mistress regardless of the length of their relationship or the strength of it because the man is part of a traditional Korean family.  The missing man's name is Park Dae-Hoon.  The last time this man was seen was at a bathhouse in 1994 as it was being raided.  His son, David, is soon to marry and David's older brother feels the need to find his father before then.

I have to say that I got extremely confused while reading this book.  With all of the Korean words and names (that are quite difficult to look up on Google by the way) I have to admit that it took me forever to figure out who (in relation to what family) had disappeared and all of the parties involved with that person.  I almost had to take notes as I was reading.  I did eventually figure it out but I have to say that it was difficult to do at times.  I had to keep bookmarking and going back on my Kindle.  That is not to say that the book was not written well.  It is an excellently written book.  My ADHD just managed to kick in a few times before I figured out who was who.

While Cole is investigating the mysterious disappearance people start to die.  He is targeted and someone he holds dear is almost killed in the process.  The closer he gets to finding information about the missing man, the more dangerous his life becomes.

This book is all about Korean traditions and Korean families.  Men are not allowed to be gay.  If they are, they keep it hidden and still go on and marry a woman and produce heirs.  To come out as gay means losing everything... being cast out of the family which, to some, is a fate worse than death.  But there are a lot of gay Korean men in this story and not all are as discreet as it is felt that they should be.  This is the case with the son of the missing man.

I cannot go into a lot of details about the disappearance or the murder investigations without being confusing.  Suffice it to say that Cole is targeted by a killer, people die and the details behind the disappearance are satisfactorily resolved with the exception of one question that I cannot mention here because it would give a major spoiler.  The murderer makes himself known and again, he was not who I thought it would be.  The reasoning behind the murders was  odd but made sense in a strange way.

Jae and Cole continue with their relationship growing, closer each day.  In the back of their minds it is always there that some day Jae will have to walk away.  It is his duty to do as his family expects even if I felt that his mother didn't deserve anything from him, nor did the rest of his family.

Cole's father and stepmother make an appearance along with his half-sisters.  It is the first time that Cole has had contact with any member of his family (except his brother Mike) since his father kicked him out of the house many years earlier for being gay.  I thought I disliked Jae's family.  Not even close.  Being homophobic is bad enough but to say the things that were said to Cole?  Reprehensible.

I fell in love with Jae in Dirty Kiss.  That love grew stronger in Dirty Secret.  He knows what he is expected to do regardless of how it affects his happiness.  Cole knew going in how it would be but he couldn't stay away.  I am so eager to see these men finally have their true happily-ever-after.

With the exception of Scarlet, Bobby the best friend, Claudia the office manager, Mike, and Neko (the demonic cat) I did not like most of the secondary characters in this book though each was necessary for the story to unfold.

There is quite a bit of humor in this book.  There is funny banter between Cole and Jae, Cole and Bobby and with his brother, Mike and also with Claudia.  This is nice after the seriousness of the rest of the book.  It is not enough to be overwhelming but it helps to lighten up the story.

Overall, another outstanding book by Rhys Ford.  Yes, I was confused over part of it.  I got over it.  Once I figured it out everything went smoothly.  I've learned over the course of the other books I've read by this author to expect to be thrown off guard at some point.  That was definitely the case with this one.  There was a little surprise thrown in at the very end which of course makes me that much more eager to read the next in the series which thankfully will be out in only a few weeks.  I will pre-order the day I'm allowed to do so.