A male prostitute.  A naive scientist.  An abusive father and alcoholic mother.  Teenage twins with special needs.  A fast-paced story with a lot of different twists and turns. 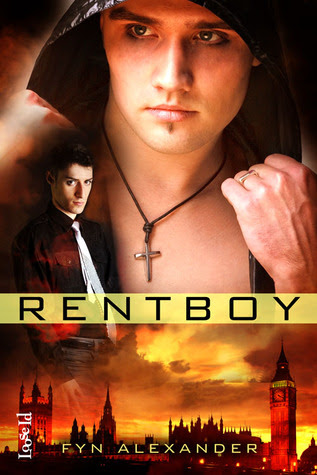 Dr. Edward Atherton, a 30-year old genius scientist, is on the verge of turning thirty and he is still a virgin.  He knows he's gay but he's always been too shy to approach a man.  He goes in search of a male prostitute to finally rid himself of his virginity and ends up picking up a young make-up wearing Goth, Fox Baillie and taking him home.  Thrilled to have finally had sexual contact with someone other than his hand, he goes in search of Fox again the next night.  They end up back at Edward's place.  When Edward wakes up he discovers that his laptop is gone.  The laptop contains information on a formula that Edward has been perfecting in his lab.  Even knowing that Fox is a thief, Edward still wants him. He is shocked after a meeting with his boss over the theft when he arrives home to find Fox sitting at his doorstep holding the stolen laptop, with the hard drive completely wiped.

Fox is not who he appears to be.  He is a 19-year-old college student who is forced by his abusive father to pretend to be a male prostitute in order to seduce Edward to gain access to the laptop that he is forced to steal for reasons unknown to Fox.  There is no saying no to his father.  He is a former military, tough-as-nails bastard.  Fox goes along with whatever his father orders him to do to protect himself and his 13-year-old twin siblings and his alcoholic mother.  What Fox did not expect was that he would begin to fall in love with Edward almost from the moment he met him in a dark alley.  Edward feels the same way but Fox knows the relationship can not go any further because of his lies.  The lies that he knows will blow up in his face once the truth comes out.   But he can't stay away from him.

This book was a roller coaster.  Edward is the typical, stereotypical nerd with a lot of book smarts but very little in regards to street smarts.  Fox is the complete opposite as he was forced to grow up at an early age because of his abusive father.  His siblings are special needs for reasons that come out in the book.  His mother is an alcoholic who is unaware of her surroundings 99% of the time.  She has never been a mother to her three children and she has sat back and allowed her husband (their father) to physically and mentally abuse the entire family.  The fear of the entire family is written well, especially the twins.  You can almost feel it when their father walks into a room.  The abuse is not glossed over.  The author writes it in disturbing detail.  While it is difficult to read, it is real.  My heart broke for Fox and the twins.  His mother?  Not even close.

The author made a point in trying to make the mother sympathetic toward the end of this book.  While I appreciate the effort, I found nothing redeeming about the mother at all.  Her drinking did not excuse what she allowed to happen to her children at the hands of her husband before it became an addiction.    By sinking into a bottle (before it got to be an addiction for her) she turned her back on the abuse of her children.  Instead of fighting for her kids, she pretended as if they were not suffering horrific abuse at the hands of their father.  She chose to drink herself to oblivion so that she would not be forced to listen to what her husband was doing.  Regardless of how she ended up at the end, she was a horrible human being in my eyes and there was absolutely nothing good about her.

The twins, however, were precious.  Injured during a beating by their father when they weren't even toddlers, they cling to each other and Fox, never saying anything other than his name.  The way Fox protected them (at times taking beatings so they wouldn't) made me fall completely in love with him. He did everything in his power to protect them even if it meant betraying Edward, the man he has grown to love.

The purpose of the stolen laptop comes out relatively early on.  It involves international terrorism that puts Fox and Edward in danger.  When that comes to a head, it is brutal for both men.  Edward can't learn to trust Fox after all the previous lies and because of that lack of trust, he is put in a dangerous situation that Fox walks right into.  As with the abuse, this was written perfectly.  I found myself cringing often while reading this book.  About the time I was thinking that things were starting to settle, the author would throw something else out there without warning and the story would change again.  It was perfect.  The way everything came together was a nice surprise.

Overall, I found this to be an outstanding book with the exception of a couple of things... mainly in regards to the sexual situations.  I found myself saying to myself "Uh, he's a rentboy.  You don't just do that."  Of course the reader knows that Fox is not a male prostitute but Edward does not.   Also, there was very little prep during the sex and that came across as completely unrealistic.  Otherwise, the sex is good.  I really enjoyed this book.  Even the horrible mother and bastard father.  Had either character been written differently, the story would not have worked.  Kudos to the author for not shying away from bad situations.  It made the book that much better.  While this ended as it should have, I would love to see a short some day with an update on the twins.  At the end of this book, they have made progress.  I would love to see that in more detail.  Also, I am a big fan of books where the two main characters have a substantial age difference.  Granted, that normally does not apply to a 19-year-old kid.  However, Fox was written (in my opinion) as much older than his years so I did not see him as a teenager.

This is my first by this author.  After reading other reviews of this book, I now know that I have to read the Angel and the Assassin series soon.