Into This River I Drown, TJ Klune

"Sometimes I float along the river, for to its surface I am bound.  And there are times stones done fill my pockets, oh Lord, and it's into this river I drown." 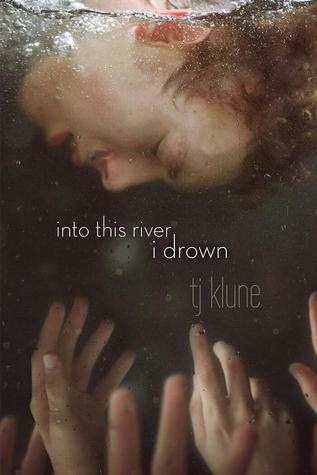 Benji Green, now twenty-one, lost his father when he was sixteen.  Big Eddie was killed when his truck ended up in the river on a stormy day.  It was ruled accidental but Benji knows better.  He knows in his gut that something else happened that day.  He has spent the past five years immersed in grief so severe that he only barely manages to survive day-by-day.  He gets up.  He goes to work at Big Eddie's, the gas station he owned with his father.  He gets through the day, goes home to bed and gets up and does it all over again.  Benji doesn't live, he merely exists, his father never out of his thoughts even for a little while.

Big Eddie was a bear of a man.  Everyone loved him.  Everyone respected him.  But no one more than his only child.  Without Big Eddie, Benji is alone... so alone.  He has his mother, Lola. He has the Trio, his mother's three sisters who moved in the day Big Eddie died.  He has Abe, an elderly man who has known loss and who is Benji's only friend in the world.  But he doesn't have Big Eddie, the only constant in his life... the only person who understood Benji.  Without Big Eddie, Benji cannot be happy.  He can't move on.  Big Eddie is always there even in his dreams each night.  He dreams of that moment when Big Eddie crashes into the river.  The dreams are so real.  There are blue feathers everywhere.  There are signs marking where Big Eddie's truck went into the river.  There is the river swallowing Benji as he tries to reach his father, knowing his father is drowning.  But someone... some thing... always pulls Benji back right as he is about to reach his father.

One day he reaches his breaking point.

Then it happens.  Benji's prayers are answered when Calliel suddenly drops into Benji's life.  Calliel is Benji's protector.  His guardian.  He eventually becomes his lover.  But there is more to Calliel than meets the eye.  Calliel is not like Benji or the other inhabitants of the small town of Roseland.  It is his job, his duty, to protect those of Roseland, most notably Benji.

There are those in Roseland who know the details of Big Eddie's death and they will stop at nothing to keep those details hidden even if it means destroying Benji and the rest of his family.  Veiled threats are thrown at him at every turn but he won't stop searching for answers even if it means losing his own life in the process.... even if it means losing the man he is growing to love and the first bit of happiness he has felt in five years.

There is an interesting cast of secondary characters.  There is the Trio of Lola's sisters:  Mary,  Christie and Nina.  Nina is a sweetheart.  She is a breath of fresh air in a story that is so heartbreaking at times that it literally brought tears to my eyes.  Nina knows things.  She feels things.  She sees nothing unusual in Calliel, the man she calls Blue who suddenly appeared during one of Benji's weakest moments.  Nina is wise though she is quite different from her sisters.

Then there are the residents of Roseland:  The sheriff who may or may not have something to hide.  The mayor who is most likely not on the up-and-up.  I've mentioned Abe, the elderly resident who is Benji's only real friend in the world. I absolutely adored him.  There is Rosie who owns a diner as well as various other typical small town residents.

There is so much that I could say in this review but I'm not going to.  Too many times I have had this author's books ruined for me by a comment here or there by an eager fan who has felt the need to give details that should only be seen by one reading the book.  This entire book is a spoiler.  Everything from who Calliel really is to the mystery behind Big Eddie's death.  There is a reason that the author kept specific details close to the vest and for that I am grateful.  Nothing in this book is as it appears early on.  It would be unfair to have it ruined for those who have not yet read it.

This is not your typical TJ Klune book.   The author's trademark humor is evident but it does not take center.  The heartbreak of loss and grief do.  This is told from Benji's point of view so the reader is given inside knowledge of his all consuming grief.  You feel what he feels.  You hurt for him as he desperately seeks answers for what really happened to his father.  You feel for him as he knowingly puts himself in danger in order to avenge his father's death.  Around the 50% mark on my Kindle, I found myself wondering "What's left to tell?  I have an idea what happened to Big Eddie.  Benji is being given the chance of happiness with Cal.  Where else can the author go from here?"  It did not take much reading before I realized that the story had only really just begun.  I had also managed to only get misty-eyed to this point.  By the time I got to 60% on my Kindle I was grabbing tissues as fast as I could.  My heart literally broke for Benji.  It broke for Big Eddie.  It broke for Cal.  It broke for Lola.  Having experienced this kind of loss (my sister, not my father) I could sympathize so deeply with what Benji was feeling and the way the author described it was real.  Very real.  It took me back to the time not long after my sister's death and I related to Benji in ways I wish I could say I couldn't.  No one gets it unless they've lived it.


"They understand my pain even if not its depths.  I don't know how deep their own pain goes, but I know it's nothing compared to my own.  Selfish, yes.  I know.  I know that through and through.  But pain is selfish.  Grief is selfish.  It demands attention, and the more you focus on it, the more it wants from you."

The resolution is unexpected and emotional.  I can honestly say I did not see that coming.  This made the story so much better for me.  About the time I was convinced I knew what was about to happen, the author threw me for a loop.

There are a couple of references to other books by Klune in this one.  My personal favorite and one that infused a little bit of humor into a very serious story:


"Maybe it's a bear, I thought.  Or maybe an otter. That would be kind of neat to see."

There is also mention of characters from another of his books but I won't elaborate as it would be too telling.

Overall, this is an another outstanding read by one of my favorite authors.  I admit to wondering early on where the story was going but it did not take long before I was completely engrossed, eager to see how everything would play out.  I laughed. I cried.  I ended it with a smile on my face.  This is not a book for everyone but it was definitely for me.  It touched me deeply.  Also, make a point in not skipping over the dedication.  It is very touching.


It should be noted that an advanced copy was provided to me by the publisher in exchange for a fair and honest review.  This, after I had pre-ordered (and paid for) the book the day it became available for pre-order. I was given the opportunity to read it early and I pounced on it.  Those who follow me on Goodreads or this blog know that I am a huge fan of this author so the fact that I was provided an advance copy in no way affects my views or opinions of Into This River I Drown.
Posted by Cindi at 19:08