496BC is a nice, short follow-up to Alexios' Fate and is part of the anthology Lust in Time. 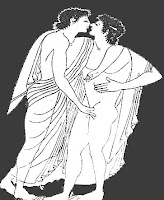 So now I'm on a Kayla Jameth-a-thon having finished both Alexios' Fate and 496BC in the same day and enjoying the hell out of them both.

496 BC is part of an anthology, Lust in Time, and gives you a nice little vignette on one of my favourite complicated couples? Alexios and Galen. I say couples? as King Lykos is Alexios' mentor and therefore sexual partner as well. Galen was Alexios' slave and lover being freed by Alexios as of the end of Alexios' Fate. It is only weeks after the end of book #1 that 496BC takes place.

In this book Galen is the narrator and he was a bit...uncertain. I understood his feelings. At the end of Alexios' Fate, Galen had been made a freedman by Alexios. Now Galen is caught between feeling like he is still a slave, he belonged to Prince Galen for over a decade, not quite knowing where he fits into this new world as Alexios' lover and still not having much say over what goes on. They are now on one of Lykos' triremes, and Alexios is learning military strategy and current politics. 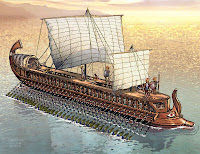 Galen is feeling very insecure of Alexios and Lykos' relationship. The problem is Galen  is jealous. He doesn't know for sure whether he will be left behind by Alexios in favour of Lykos. He doesn't have a skill set, apart from being a personal slave to a prince. Lykos commands a fleet, is older, infinitely more powerful, and worldly. The problem is Galen is having difficulty keeping his jealousy to himself and some crew members of Lykos' fleet decide to show him how they feel, compounding Galen's fear of his position and stature.

However, it is clear that while Alexios has respect and fondness for the older Lykos, Alexios loves Galen. Oooh, and wasn't that made clear in the tent in a camp they were in. I do love voyeurism/exhibitionism. Yes. I. Do.

496BC is only small, and I won't say anymore. You could certainly read 496BC as part of the anthology, Lust In Time, but it is so much better knowing everything that preceded it in Alexios' Fate. There is definitely some nice, sexy reading here and you could read it just for that alone. The author, Kayla Jameth, has let me know that there are more coming out in this series so start at book #1, Alexios' Fate, and then read 496BC in preparation for the next in the series.
Posted by kazzak at 07:57