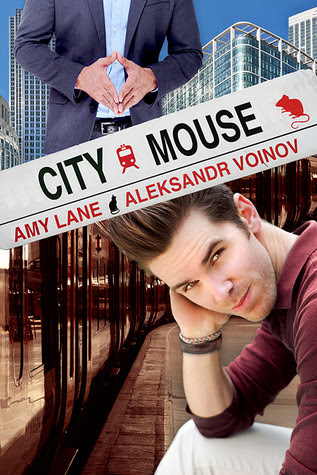 A great follow up with two of my all-time favorite characters.

Country Mouse (the first in the series) was one of my favorite books of 2012 and is listed as such in my "Best Of"  list on this blog.  In it we were introduced to Malcolm Kavanagh, a wealthy British banker.  He was stuffy, arrogant and snobby.  He got off by dominating other men in bed with no emotional connection.... when he wasn't working 80-hour weeks.  For Malcolm it was all about money, power and domination.  Then he met Owen Watson, an American vacationing in London with his ex-girlfriend (who was there for a booty call with her ex).  Malcolm is gay. Owen is bi.

The two men meet in a bar when Malcolm's one-night-only sub fails to show.  Malcolm wrongly assumes that Owen will be a pushover and immediately begins to pursue him.  Little does Malcolm know.  Owen was no pushover.  They end up spending a weekend together and Malcolm, who has never felt anything other than the need to be in power suddenly started seeing things... feeling things... with the American tourist that he never would have believed possible.

I am not going into everything that happened in that book but I will say that I am a total sucker when it comes to certain things in books.  I am a complete romantic sap.  Without giving it away for those who have not read Country Mouse, I will say that the ending of that book was by far one of my all-time favorites.  It was a definite "Aww..." moment.  I made a point in reading it again before starting City Mouse and it felt just as good the second time.  I adored this couple in that book and that adoration carried through in this one.

City Mouse picks up almost immediately after Country Mouse.  Malcolm and Owen are now living together in Malcolm's flat in London and are slowly becoming domestic.  Malcolm is still working his crazy hours and Owen is quick to find a job of his own.  Everything is perfect in the beginning.  They are still in the honeymoon phase and it's still all about sex and getting to know each other.  Unfortunately, as time goes by the two must make adjustments in order to make things work.  Some are painless, some not.

This takes place over a period of six-weeks with each week bringing something else into the world of Malcolm and Owen.  As each week passes and the two men make their way to the six-week mark (considered to be when the honeymoon phase is officially over) Malcolm and Owen realize that there is more to a real relationship and being in love than just sex.  They love each other deeply but are different in so many ways that their personalities and ways of life clash.  Often.

Malcolm is still all about money and his career. Owen only wishes to be happy in his job regardless of the amount of his paycheck.  Malcolm is arrogant.  Owen is laid back.  The two must work together... hard... to make it work.

There is a lot of humor in this book.  I found myself laughing more than once at Malcolm.  There is one part of the book where Malcolm goes to Owen's place of employment which is where Owen does IT work for a co-op of various businesses.  One is an adoption agency.  Malcolm very obviously does not like kids and makes this known quite bluntly.


"Who knew where the kids on the walls came from -- they'd likely been left behind after one screaming fit too many in a public place, or maybe their parents had been lynched because they couldn't keep the critters under control on a packed train."


Then there is the sex between Malcolm and Owen.  Hot.  Very, very hot.  It was hot as hell in the first book and that does not change in this one.  If anything, it got better and more creative especially where it happens.  Malcolm is creative.  To put it mildly.  Unfortunately his creativity and teasing tends to backfire on him.

"Priaprism," Owen said automatically, and the fact that it mirrored Malcolm's own thought made Malcolm want to smack him. "It's the state of having an extreme and engorged --"

"I know what it is, what I need to know is where to get rid of it."


This book is all about the reality of a relationship.  Once the honeymoon period is over the real world steps in and real issues arise.  When you throw together two men who are complete opposites in pretty much everything those issues will be greater.  It was a pleasure watching as Malcolm and Owen got beyond theirs and worked toward their happily-ever-after.

Overall, an excellent continuation of Malcolm and Owen's story.  I absolutely fell in love with them in Country Mouse and that was only added to in this one.  My thanks to the authors for not stopping in the train station. :)

I should also note that this reviewer is kicking herself for not yet reading another series by one of these authors that my blog partner has pushed me to read (and that I do have on my Kindle).  It is mentioned briefly in this book.

This book was provided by Net Galley and Riptide Publishing in exchange for a fair and honest review.
Posted by Cindi at 18:12