A paranormal book that read a bit like a superhero comic book story. 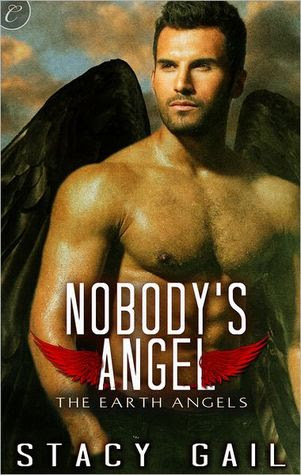 Kendall is an investigative journalist.  She watches her friend and coworker (Dave) strangle his co-anchor and then commit suicide by shoving a pen into his jugular during a live newscast.  Kendall jumps into the fray and tries to stop him to no avail.  Being that close, Kendall is the only one who can see the white haze over his eyes as this is all going down.

Zeke is one of the paramedics called to the scene.  He treats Kendall for injuries and finds that the only blood on her is that of Dave.  Zeke also has a secret.  By day, he is a paramedic.  By night he is a masked man who swoops in and helps those who are in danger.  He has been dubbed by the media The Guardian Angel.  What he is is a Nephilim, which is (as described in this book, though the definition varies according to the source) a descendant of fallen angels.  Zeke also has black wings that he keeps hidden.

Kendall is what I would call the too stupid to live (TSTL) character.  The too stupid to live character is the dumb one (usually a female in my experience) in books and movies who know they are in danger but do really stupid things... like open a door knowing that the killer is on the other side, or running UP stairs to get away from the knife-wielding bad guy instead of running through the open door that is less than 3 feet away.  I recently reviewed a book on this blog actually titled Too Stupid To Live and I have to say that Kendall beats the character in that book by a long shot.

Kendall is in danger.  There is a spirit/demon/poltergeist (shortened to geist)/evil-bad-guy-dude trying to kill her.  She knows this.  So what does she do?  She keeps putting herself in a position of needing to be rescued by The Guardian Angel.  She purposely runs into dangerous situations without thought.  She is warned by Zeke and the stranger in the mask (yes, the reader is very aware early on that Zeke and the Guardian Angel are one and the same) but yet Kendall is too stubborn to listen to those who have to keep rescuing her, so she launches head first (so to speak) into bad situations.

Kendall is falling for Zeke the paramedic.

Kendall is falling for the masked man, The Guardian Angel.

Kendall is feeling guilt over being torn between the two men.

Here we have what I call a DUH! moment.

If you have read this far down I am sure you have noticed the similarities between this book and some of the more popular comic books and superheroes.

Kendall is an investigative reporter (think Lois Lane) who falls for one man (think Clark Kent, Bruce Wayne) who is a superhero by night (Super Man, Batman).

I admit to feeling like I was reading fanfiction throughout the entire book.  Then let's throw in the name of the news network that Kendall works for... KPOW.  I kid you not.

The entire point of the book was to stop the senseless murder-suicides that are being caused by the geist.  Zeke and Kendall get together (finally) after one of Kendall's more dumb moves in regards to finding out information.  She discovers who Zeke is and they have sex.  I read one review that put a warning at the end saying EROTIC SEX.  Uh, no.  There is a little bit of sex in this book but I assure you it would never be considered erotica in any way, shape or form.  Erect manhood and glistening womanhood do not erotica make.  Trust me on that one.  I've read erotica and this is definitely NOT it.

Zeke and Kendall finally get to the point where they might be able to rid the world of the 'geist' that is threatening Kendall and killing others.  Do they go in together?  Do they meet the 'person' in a public place?  No.  They separate and Kendall meets the 'bad guy' at a secluded lighthouse on a cliff........ in the middle of fog...... alone.  TSTL.

Eventually, Zeke saves the day and he and Kendall decide that they care enough about each other to move forward in their relationship.  The end.

I know it may seem like it, but I did not actually hate this book.  I just thought that it was too similar to the superhero movies that I've watched my entire life.  As I said, it read like fanfiction. I obviously had a problem with Kendall as she continued to do stupid things.  Zeke, however, I loved.

Overall, it's not a bad story.  Just a bit too close to other things I've seen and read.  I love the cover.


This book was provided by Net Galley and Carina Press in exchange for a fair and honest review.
Posted by Cindi at 16:06