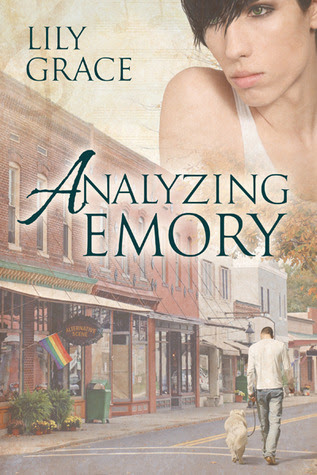 Two men find that social, education and financial status mean nothing when it comes to what's in their hearts.

When offered the position of the resident psychologist at the Chicago GLBT Center by an old family friend, Kyle Michelson can't get packed fast enough.  Leaving a former lover and his life in New York is not a difficult thing for Kyle.  He is eager to return to his hometown doing what he loves best... counseling gay and lesbian teens, something he had managed to get away from in the big city.  Not long back in town, he decides to check out his old stomping grounds, a gay club called Spin.  Not expecting to do anything more than have a few drinks and check out the new scenery, he is shocked when a gorgeous younger man walks over to talk to him.  One drink leads to Kyle taking the man back to his home and ends with a night of passion... and then breakfast the next morning.  When Kyle suggests getting together again, the young man practically runs out the door after making it very clear that he does not do relationships.  Kyle watches him go knowing that they'll probably never lay eyes on each other again.

Emory Brenner is out for a good time.... and a good fuck.  He dresses to attract and knows he can have any man he wants... but only for the night.  He does not do relationships and he never goes home with the same man twice.  While dancing at his favorite pick-up place, he notices a good looking older man checking him out from across the club.  Making his way across the crowded dance floor, it doesn't take long for the two men to make a connection and head out to the other guy's apartment.  Emory goes in expecting to spend a few hours in bed with the man and then leave when it's over, never thinking about the man .... or the experience... again.  Of course, it doesn't happen that way.  For the first time in his life, Emory feels more than the excitement of an intense orgasm.  He doesn't want to leave when the sex is over and this terrifies him.  He ends up spending the night (something he never does) and even gets talked into breakfast the next morning.  He reminds himself (again and again) that he does not do relationships and he leaves even after the connection he felt, not just in bed, but after spending time with the man.  He bolts in hopes of never seeing the man again.

Of course life doesn't quite work out as planned.

Two days after the amazing experience with Emory, Kyle is at the GLBT Center catching up with the old family friend who hired him and checking out his new place of employment.  He has not stopped thinking about Emory and is shocked to the core when he accidentally runs into Emory, a volunteer at the center.  Playing dumb to cover his own shock, Emory pretends (in front of the Center's director) that he and Kyle have never met before.   Hurt, but willing to play along, Kyle goes along with the introduction.  For days afterward, Emory dodges Kyle and refuses to talk to him.  He is still reeling from the feelings that the other man managed to pull from him and he makes it clear that he will not be starting any type of relationship.  Kyle is persistent and shows up at his place of employment (a record store) and a slow, reluctant relationship between the two begins.

This was a nice story but there were a few things that bugged me.

- Emory.  He came from a horrible childhood and (with the help of the Center's director) has managed to get his GED, find a job and get an apartment.  When he left home at 17 there was no hope.  Now he is able to have a somewhat normal life... with the exception of his irrational fear of getting close to someone other than his best friend, Ben.

- Kyle's family... for the most part.  His sister makes a few appearances though I found that parts of that were unnecessary and only added to the word count.

- Emory's best friend, Ben.  Ben works with Emory at the record store and does not pull any punches when he feels that Emory is being unreasonable.  This is frequent as Emory has a horrible outlook on life and he feels that he could never be good enough for a man as well off and as educated as Kyle.

- The story of the GLBT Center.  It is described as a wonderful place for gay teens to hang out, get psychological help or even stay if they have nowhere else to go.... if their parents threw them out because of their sexual orientation.  I enjoyed hearing about the center as much as I did reading about Emory and Kyle.  I know that places like that do exist in the world, but as I was reading I found myself wishing there were more like it.  It is somewhere I would definitely want to volunteer.

- Kyle.  He (though annoying at times) was very patient and willing to wait for Emory.  He also wore glasses.  I love men who wear glasses. :)

- I love opposites attract stories.  Kyle and Emory are definite opposites.  Kyle is wealthy with several college degrees while Emory has nothing in the line of education other than a GED certificate and he is far from wealthy.  Kyle is seeking a long-term relationship.  Emory fears getting too close to anyone.

- Max the dog.  Emory adopts a dog at a shelter and 'shares' him with Kyle.  This marks the beginning of a true relationship between the two men.

- I am aware that the title of the book is Analyzing Emory but I found that Kyle was so busy analyzing that he didn't step back when Emory simply needed a friend... not a psychologist.  Emory was not seeing him in a professional capacity and I felt that Kyle took the "tell me how you feel" spiel a bit too far... too many times.  In one case, Emory is starting to come around and asks Kyle to go on a date.  What does Kyle do?  At the worst possible time?  "Tell me about your childhood...."  Hello???  Dumb move.  Needless to say, Emory ran.

- Richard, the Center's director, betrayed a confidence when he discussed Emory's past with Kyle.  It was not Richard's story to tell.  It was Emory's.  If Emory wanted Kyle to know anything (and it was quite obvious that he did not) then he would have shared that information on his own... in his own time.

- The story dragged on a bit too long.  While I could relate to Emory's reticence and fears, I felt that part of the story could have be resolved much earlier.  There was so much back and forth that it started to wear thin about two-thirds into the book.

- Parts of the story are so predictable.  I felt like I was reading script from about half of the m/m books I've read (I've read close to 550 m/m books).  While parts of the story were a little unique, others were more of the same unfortunately.  From the cliches to the misunderstandings to... well, pretty much everything.

Overall, I found this to be an enjoyable read.  I enjoyed watching Emory overcome his fears and finally take a chance on Kyle and what they could have.  It took so much quite a bit of time for the two men to finally get it right  but they do finally have their happily-ever-after.

My first by this author.