The last of the Pravus/Neuri Series goes out with much love.

Aisyx is an incredibly complex book and if you haven't read (pretty much) all of the other books in the Pravus/ Neuri series you will not understand it, this I can guarantee you. I have to be honest and say I have not read the Vamporium series which put me at a slight disadvantage in relation to a couple of characters and at least one relationship.

The book does start off with recaps of previous books but in a clever way with extra information that you didn't get before. Information that just faded into another scene that was more important in the other books. So it leads you into Aisyx cleverly, nothing boring here at all. Excellent memory jogs lead you into the main story. And what an epic story it is. There are twists and a massive flipping turn in Aisyx, hence I'm somewhat crytic on the general plot. Have to be.

The plot thickens after the Vesna's appearance. There's concern by the Neuri for the Slakax women. The Vampyres are somewhat fragmented, Arelstin seeming to be causing problems, Jowendrhan's feeling left out and not able to get to Phoebe, also gaining elder powers, and some horrible humans think because someone is different they should be 'studied.' The fact that the supes have been seen on BooTube (love it!) is also a problem. There is an escalation of a war between factions, and now the humans are thrown into the fray. Aisyx finds a woman, Jowendrhan is fucking awesome! Much is learnt about characters that were thought one way but are another. And some characters didn't surprise me at all, sadly. There is a very interesting outcome but I can't discuss it because to do so will ruin absolutely everything. Why the war was happening, why Arelstin was doing what he was doing, how the fractured paranormals were dealt with, and who the enigmatic supes, that were on the periphery before but seemed so intense, are. What their part was in the final countdown. 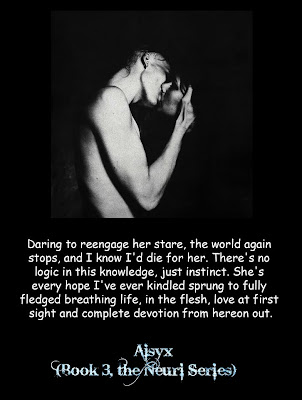 Well I loved Aisyx, this paranormal who didn't seem to fit into the Vapmyre or Neuri world but really did, more than he ever could have known. Who never thought he would get a mate, and when he does, well it's beautiful, he's smitten. He wants to shop for her, take her to dinner, look after her; and when she is kidnapped, well, poor Aisyx tortured himself with guilt. Nada's kidnapping pissed me off!!  It was the kidnapping of innocence itself. Nada was this beautiful person, both inside and out. I loved the way the elements touched her. The way smell delighted her. The way she rolled around on Aisyx's bed and his reaction to it. I salute you Aisyx you're a better man than some. Nada is a Vesna that had been chased down from her seclusion in the mountains by (Vampyre) Arelstin as part of a master plan. Her sisters are gone. It appears she is the only Vesna left. Is this the case? I loved her sweetness, her love of the Earth and her desire for peace, harmony, and for nobody to hurt anybody else. The world would be a better place with a lot of pure-hearted Nada's in it, her light. Aisyx too. He was a sweet male. Together they personified a pure love.

Zaria - you go girl. you and your light sabre twins

Jowendrhan - What a Vampyre. What a prick.... I loved him even more. He has rocked every book for me, and I'm here to tell you he is a right bastard. I'm glad his brother came to him. He misses him so much. I'm glad he got over his Phoebe love. He loves her as a sister. I'm glad he got a shot at Life! And he is gorgeous and snarky and bitchy and funny and loyal and all kinds of sexy and arrogant...and insecure at times. I liked the D/s component to his relationship. He was everywhere in Aisyx. He had his finger in every pie *cough cough*

Keyla - I'm jealous. She got my man. She got Jowendrhan. At least you have five letters in your name and it starts with K. Jokes aside - you see two points of view on the same situation when Jowendrhan meets Keyla which is a knock-out. They are amusing, sexy and interesting. I laughed when in the beginning Jowendrhan feels the Neuri are whipped by their women. Who's whipped now Jowendrhan *laughing at you Jowendrhan, laughing.. at ..you*

Arelstin -  to talk about him would create spoilers so it's verboten, dammit.

Selene -  what a good mum/nurturer in many ways to many people....When she's needed, when no-one else could help with a dire event. Selene came through. That's the way 'mums' should be, there for their children. Loving them unconditionally. She was kick-arse and loving all at once. She is an amazing catalyst for many things, once again my hands are bound.

Ryan - came off as a selfish being in Aisyx, yet he was so lovely in Ryan. It felt unfair to me personally. I understood why Selene was pissy at him, I absolutely get it, but, please, Arsay had him under lock down and wouldn't let him go to Phoebe. Yes, I understand why (keyboard tied.) Did I like hearing how he treated Selene? No. Did I think he was caring for Phoebe when she needed it in Ryan? Yes. He didn't cause Seithe's demise. I found it hard to reconcile this Ryan with the Ryan of the same book name. 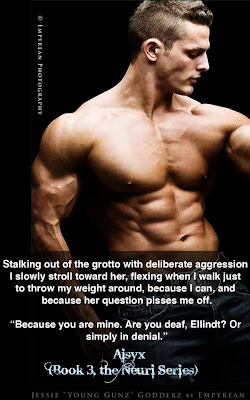 Ellindt and Douglas and Zarak - no, not a menage, but an interesting, noble concept. I know she's with Douglas, but...she's really on loan at a time when the world needs love.....
I was not so into the Ellindt in Aisyx. I should have been, she was happy and nice, when not cha cha-ing with Zarak. But I missed her inner killer-bitch-mistress. I didn't enjoy her all gooey-eyed over Douglas. I'm going to assume Douglas comes from the Vamporium series and I did not feel attached to him as I have not read that series. He was funny and charming but their love was lost on me. Give me the brutality of Ellindt and Zarak, that's what I'm talking about! Yes, I'm sick. When they are together they are nasty and I loved their chemistry; the way Ellindt rode roughshod over others, but not Zarak. Oh yes, Ellindt is good when she's very very bad and Zarak even better. I get it, Kazza K is singing "All you need is love, All you need is love...."

Every. Single. Character had their own heading and detail thrown into the mix. There are a lot of POV's but they were necessary to see the game plan, to know feelings, different perspectives often on the same event or situation. It's plenty sexy and there are some humorous lines and thoughts as well. There is a lot of spirituality in this book, along with statements on the world as it stands, and religion. Poppet has some strong opinions expressed in all of the series but it comes to a conclusion in Aisyx. There is much said about their/our desires to form factions and hate others because they are different - religion, looks, ethnicity, colour. It also looks at love as an answer and that unity of mankind need not be so hard, and yet it has become so. The paranormals, and what they go through, mirror the human race, the way we are. That the world would be a better place if we chose love, peace, respect, and if people did not desire dominion over others, are strong overriding themes. Positive thoughts and sentiments. I'm sure I have left off some of what I wanted to say but the basics are definitely here.

Aisxy was well written. I know that this series was cut short and a heck of a lot was condensed in Aisyx. There was so much written in so few pages - the calamity and congress. The amount of planning was incredible, the details intensely written. The series is concluded now and I feel both happy and sad....so I have mixed feelings...leaving the wonderful paranormals/spirits/daemons of the Pravus/Neuri series behind for good.