An older woman and a younger man.  She's wealthy.  He's not.  Each have insecurities they must overcome in order to move forward and find their happily ever after.

After reading a short by this author a few days ago and loving it, I was eager to jump into another book by her.  I felt that I had lucked out when Liberating Lacey was chosen for me literally two days later in a pick-it-for-me challenge in a group that I co-moderate on Goodreads.   I started reading this within an hour or so of having it chosen for me.  Unfortunately, it was not quite what I expected.  I did like the story but there were a few things that bugged me.  I will come back to that.

This starts out super hot.  Lacey Meyers is in bar for one reason only... to hook-up with a random stranger.  She's thirty-six years old.  She has been with only one man in fifteen years, her ex husband, who she hasn't been with in over a year.  Her ex was pretty bland in the bedroom.  She is eager to see what she has been missing.  She wants hot.  She wants quick.  What she doesn't count on is meeting Hunter Anderson, a man eight years her junior.  It doesn't take long for the two to hook-up in a very public way (outside, up against an SUV, in plain view of anyone who happened to look their way).  The sex was hot as hell.  What led up to it was hot as hell.  Hunter follows her home after the sex against the SUV and ends up spending the night. This begins a sexual relationship between the two that occurs over a period of several months.

Lacey is extremely wealthy.  She's got a high-paying job and she has a trust fund.  She never has to work a day in her life but she wants to.  Hunter is a police officer.  He basically lives paycheck to paycheck though he's not suffering financially as he only has himself to take care of.  Herein lies one of my issues with the book.  As the relationship between Hunter and Lacey moves forward to something more than just sex, he is constantly stressing over the fact that he feels that he could never be good enough for Lacey.  This is the entire book and I have to admit that it got tiring....... very tiring.  The woe is me attitude, while understandable, was frustrating as it dragged on and on and eventually (almost) caused the end of what was becoming a good relationship not based strictly on sex. 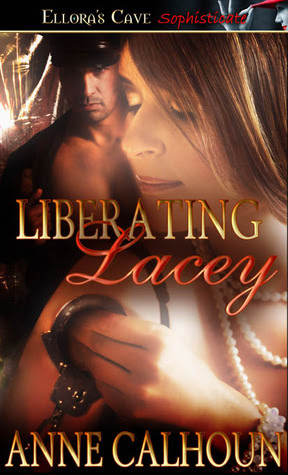 The main thing that annoyed me about this book was the constant use of endearments by Hunter to Lacey.  I live in the southern part of the United States so endearments are common in my neck of the woods.  You can't come here and not hear "Sweetie" or "Baby" or something along those lines.  But Hunter calls Lacey 'beautiful' constantly.  I'm not saying every few sentences.  I mean almost every single time he says something to her.  He called her this 66 times in a not-so-long book.  I know this because I used the search feature on my Kindle Fire (out of curiosity) and it literally showed him saying it 66 times.  For me, that took a lot away from the story because I found myself making fun of the character during moments that were supposed to be serious... during sex or serious conversations.

There is a lot of sex in this book as was expected.  The first sex scene up against the SUV in the bar parking lot was unbelievably sexy.  The others, not so much.  Sure, they were written well but there were so many that I found myself skimming about a third into the book.  I'm all about sex scenes in the books I read but this was too much... even for me.

There is one particular part of the story when Hunter has a very graphic sexual dream.  I did not find it to be enjoyable or entertaining.  I found it to be a complete waste of several pages and once again, I skimmed.

Lacey has a best friend named Claire.  Apparently before marriage and children Claire was a wild child who did random hook-ups and knew the score when it came to one-night-stands.  Instead of supporting Lacey as she was trying to come to terms with her relationship with Hunter, she knocked her down and hurt her at every turn.  Some best friend.

I love books where the characters have a substantial age difference.  Lacey is 36 and Hunter is 28.  Lacey had a slight issue with the age difference.  I never considered it while reading as the 8 years between them meant very little.

Overall, I am going to say this book is simply okay.  The writing was good.  I liked Lacey and Hunter for the most part.  I just feel that while the story was there, it got lost somewhere along the way.  It is written as two characters who hook up for a one-night-stand and meaningless sex that eventually grows into so much more.  I hardly felt the so much more until the very end and by the time I got there I was simply eager to finish the book.  The ending was not bad considering how long it took to get there.  I was not happy with Hunter in the way he handled certain things but I did like his character.  I had no problem with Lacey really at all.

Apparently I am in the minority as most folks loved this.  My lack of love for this particular book will not prevent me from reading more by this author.