Not your typical M/M romance story.


I am going to start off by saying that the beginning of this book was a little confusing.  So confusing, in fact, that I had to take a step back and come back to it later.  Once I was able to take the time to really concentrate on what I was reading, things improved greatly for me.  I ended up enjoying the story, though I will be the first to say that books with any type of dream sequences usually turn me off.  The way everything came together made all of that worth it for me.  It turned out to be a very enjoyable read. 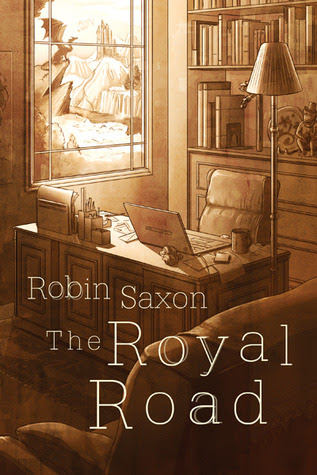 Weston designs mascots for Sanderson Designs, a small company.  That is his day job.  At night, he spends hours trying to write a novel.  He doesn't lack ideas.  What he lacks are the correct words to put on paper (or computer screen in this case).  He has a very active imagination but for some reason, he is unable to put what he sees in his head (and later, his dreams) into words that make sense for an actual story.  What he does manage to write always ends up full of stereotypes.

A new productivity consultant at Sanderson Designs, Sidney Romero, starts invading Weston's dreams.  Sidney (aka The Leech... behind his back) is not liked at Sanderson's.  He's too quiet.  Too odd.  It is assumed that he will recommend to the owner that employees lose their jobs at the small company.  Some employees are quietly rude to Sidney.  Some are openly so. Weston is on the fence (so to speak) but he too fears losing his position at the company because of Sidney's recommendations.

Weston starts having very detailed dreams not long after Sidney begins working for the company... dreams that tell a real story, not just snippets here and there.  I had to giggle at the first one in the story.... so stereotypical of so many of the books I've read over the years.

"I can't tell you how much I love you," William cried.  "I know we only met ten minutes ago after I accidentally ran over your dog, but you're it.  You're my soul mate.  My entire life is now going to revolve around you in a totally noncreepy, definitely not brainwashed way!"

Come on, you know you've read stuff just like that in books and giggled too. :)  And that's only part of that particular dream.  If I typed the whole thing I would make this review too long.

Weston's dreams get more detailed as he has them.  Funny, each hero in the dreams looks just like Sidney, the leech.

I mentioned not liking books where a considerable amount of time is given to dream sequences but I found myself getting more and more involved with each dream that Weston had.  It was like reading several stories in one.  In the end, each dream is trying to tell Weston something.  Plus, they give him great stories for his novel.... if he can ever put those ideas on paper anyway.

As the days progress with Weston and his sometimes rude coworkers worry about their jobs, Weston gets to slowly know Sidney (at work and away from) and finds that he's not the leech that everyone assumed he was.  He's a nice guy who Weston slowly grows to love.  Each dream then makes total sense, not just to Weston but to the reader as well.

Overall, I have to say that this was an enjoyable read.  The reader must seriously suspend any and all belief to be able to understand it.  Sure, it got confusing at times but if you keep reading you will see how everything comes together nicely.  The characters are all entertaining (though I did not like a couple who worked at Sanderson Designs) and the dreams were, at times, hilarious.  Weston is so out there that you can't help but love his character.  This is not your typical M/M romance novel.  There is very little sex and the story is more about Weston's dreams and writing than an actual romance.  Did this take away from the story?  Not really.  My only wish is that Weston and Sidney would have had more time together as a couple.  Otherwise, a fun read.  I've read the author's other books, co-written with Alex Kidwell.  I have been a fan ever since.  I look forward to seeing what else Robin Saxon has to offer.

The cover is beautiful.