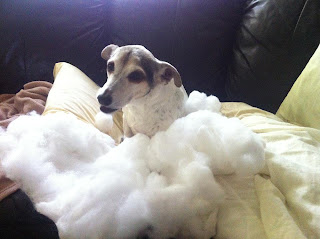 This is my 12 year old Jack Russell, Trudy. I also have a Whippet, Ted, who really isn't mine he's my daughter's; but you know how it goes, you end up with their pets when they move out, which is what happened with Ted. Ted is a bastard. Let me explain just a little. Ted doesn't listen to you, he looks at you with an expression that says"no, I don't like what you're saying, I'd much rather do what I want." He virtually decimated our furniture when he was a puppy and he used to love to steal things and hide them from us, thank goodness he got past that stage. He will still pinch BBQ chickens off the kitchen counter and suck them down like a Hoover if you turn your back for 2 seconds. If you leave any food near the edge of a counter, table or whatever, he considers it fair game; hang the consequences. Trudy, on the other hand, is the good one. She never takes what isn't hers, gets angry with Ted if he comes near her human's plate of food, and has been known to maul him for daring to defy her beloved family members. Ted barks like a girly screamer (think Ned Flanders and purple drapes), it's sooooo embarassing, he weighs around 18 kilos, he's a big whippet, and he sounds smaller than a Chihuahua. Trudy, on the other hand, weighs around 10 kilos and sounds like a German Shephard. I call her my braveheart, as she protects her family with a ferocity that has to be seen to be believed. She has literally chased Rottweilers down the street. Having said this, Trudy has a fetish that every now and then creeps up from the dark recesses of her terrier soul - she loves to rip pillows apart. She tries to repress this urge, but every so often out it pops, like in this photo. My son was away for a weekend, obviously she was none too happy about this, and she pilfered one of his pillows, his favourite I might add, and tore the tripe out of it. The evidence is above, Trudy was busted red handed but went for the "this is not what it looks like" attitude about it all. We tried to reprimand her for her 'naughty behaviour' but everyone kept breaking out into fits of laughter at our good girl gone bad. I have to say I love my dogs, girly screamer barks, dark, repressed urges and all. They make my life so interesting. Next time I must talk about our birds. One has a bell fetish and one believes the microwave is his leader.
Posted by kazzak at 23:07