Some people will do anything to avoid getting a speeding ticket.

"When the officer approached the window," he said, 'Papers' and before he could finish, I shouted 'Scissors!  I win,' and drove off."

"Why did I do it?  That's the stupid part.  I saw it on a T-shirt, and it just popped in my head. Before I knew it, my tires were kicking gravel back at the cop.  When I glanced in my rearview mirror, he just stood there looking astounded." 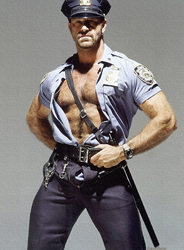 Conrad finds out the hard way what happens when he takes off before the police officer who pulled him over is able to give him his ticket.  The hot (did I mention that part?) cop shows up hours later and he is not a happy copper.

"You do have one of those faces that looks familiar."  I brought my hand up to my chin and pretended to think about it.  "Are you the guy from the grocery store?  Did I run into you with my cart?"  I asked innocently.  "I sure am sorry about that and I promise it won't happen again."  I made a 'cross my heart' gesture.  "I've already signed up for cart pushing education classes and everything."  Giving him my sweetest smile, I said, "Thanks for stopping by.  Ta-ta."

Why are cops always so angry whenever they talk to me? I made a mental note to write to the station and suggest all officers be forced to get relaxing, therapeutic massages at least once weekly.

Ah, and then it really starts getting interesting. Throw together a rough cop, a set of handcuffs, a well-placed sex toy and some rough and hot sex against the wall and Conrad gets much more than he hoped for bargained for. This is Kyle Adams so you know the sex is hot. Seriously hot.

Using his hold on my hair, he angled my head back and started kissing me.  It was rough, demanding, pure pleasure I could feel down to my toes.

Out of stubbornness I tried to deny his access, keeping my lips locked together, but he tightened his hold on my hair, making me gasp.  Without wasting any time, he started thrusting his tongue into my mouth.  He tongue fucked my mouth with a passion I've never felt before.

From there it really gets really down and dirty.

His thrusts became erratic, and I knew he was getting close.  I wanted to stroke myself off, but I needed both arms to keep myself braced against the wall.  He thrust forward one final time and stayed buried deep inside me...  His teeth bit into my shoulder, going through my shirt.  I grunted from the pressure, felt his body shudder as he shot his release.

This is classic Kyle.  Funny as hell one minute and sexy as hell the next.  There's Princess Leia, the spoiled dog that will make you giggle and the hilarious one-liners that are all Kyle.

"You better not have traumatized her; she's only eight months old.  I thought I asked you not to speak in front of her when I'm not around to supervise."

Not many authors can can throw so much into only a few pages and not leave me feeling like I've missed something at the end like this author.

Another great short from Kyle Adams.  As always, I am so eager to see more of these guys.