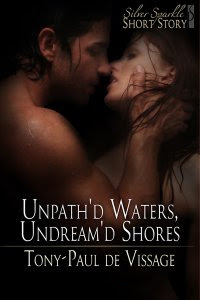 This ebook contains two short stories. Yes, the title is taken from Shakespeare's A Winter's Tale and Tony-Paul de Vissage acknowledges this in his dedication. Beautiful words and meaning by Shakespeare that are reflected well in these two stories.

Story 1 -The Lover in the Lake

Lisa is staying with her sister, Karen, and brother-in-law, Paul, in a lakeside house after the death of her fiance, Mark. Lisa is sleeping fitfully, having a dream she can't remember over and over, and has taken to walking beside the lake near the house. Paul lets it slip to Lisa that the house they live in is associated with a death of a local lass over one hundred years ago, and it's the bedroom of the girl who died, Christina, she's staying in. Paul also mentions rumours of the lake, that around twenty people have drowned there.

The evening mist was already gathering on the lake, swirling upward in little wisps for the solid blanket that lay upon the water. Slowly, it began to creep toward the shore. Lisa ignored it, thinking of her dream, trying to remember. As now she had been strolling near the lake....

The fog had rolled in too fast. Mark was standing just before her and she couldn't even see his face. He was walking slowly, eyes intent on the ground.
"What are you looking for?" she asked him. "What have you lost?"
"My soul," he answered, his voice hollow and terribly, achingly sad. "I'm searching for my soul."
He lifted his head and she saw the tears of blood streaming from his eyes and Lisa began to scream... and scream...and scream...
- - -
She stopped at the water's edge, looking down at her reflection, at her ripple-warped image. Mother and Karen think I'll forget him. They can't understand that I'll never forget Mark, even if I live a thousand years.

The writing is lovely. The tale an interesting one. Is Lisa dreaming? Is there someone coming from the lake? Is it Mark, or is it to do with Christina? who died so long ago. Twenty people have died in the lake. Will Lisa be another?

This short is intriguing and read like a camp-fire story, one where you don't realise that you're leaning in closer to the storyteller because it's fascinating. The only thing is, this would have made a better novel/la, especially where the author briefly took it. Brevity was this short's enemy. It was very nicely told in the pages alloctated it.

Set in the time of the plague. The second story is of a boatman who ferries people from one side of the river to the other, or to a local island. It was also my favourite of the two stories. I like historical  influences, language, and imagery. And it was all just right for the setting of the tale. I think the following sets the tone well  -

'Twas a cold night, a raw night. Aye, that it was. Raw, like a bleeding wound, and the wind a knife slashing at its open edges.
Once again he cursed the fates causing him to be born into a family of ferrymen. Why not a carpenter, a tailor, even a farmer? Grubbing in the dirt would be more welcome than this eternal waiting by the river, with the water's ever-present cold creeping into his bones.....
...and the lonliness...

The boatman won't be alone for long, as a hooded man on a black horse appears and asks for passage across the river, to the island. He has no money to pay, and the boatman isn't too keen on non-paying customers. He has a wife and family to support. However there is something about the man, and the fact that he can only seem to see his eyes, the fact that he wants to visit an old friend over on the plague-stricken island that has the boatman allowing him passage-

"There's sickness and death on the island." The boatman felt he should warn his passenger.
"'Twill not harm me," the stranger replied with certainty....
"I go to visit an old friend. One by whose side I've often fought in days past. He's given me much, and now, I've come to repay my debt."

Horse and rider disappeared through the shadowy trees, the curtains of fog closing around them, swallowing the sound of hoofbeats.
Once more the ferryman was alone in the river mist. It was as if they never existed...

To say more would be to ruin it for, once again, it is short, but I think its length did not detract one iota from a really good story. The words, the imagery, and the concept were ethereal. I actually re-read it the same night.

This is my second Tony-Paul de Vissage book, and both have been very good - well executed, well edited, no typos to be seen, and interesting. Yet both are different, the last one was humorous, this is otherwordly. Unpath'd Waters, Undream'd Shores is highly recommended reading.