Local birdlife and the story of a King Parrot that has made our family part of his.


I am very blessed to live in a country where we have magnificent bird life. I live on bushland and, as a consequence, have many glorious birds in my area. Apart from the standard Sulphur Crested Cockatoos and Galahs, both quintessentially Aussie, we have many other birds of great interest.When we bought our current property, 7 years ago the garden was predominantly boring green plants and palms, with 2 glorious Camelias, a Bouganvillea and a climbing rose. We decided to keep some of the plants, including the 4 I just mentioned, but replace the rest with natives - to attract birds . Wherever we buy I always native-a-fy our garden, to make sure that we leave a legacy of a nice habitat for the local birds and other creatures, and I'm here to tell you they appreciate it. I do make sure we have a mix of non-natives and natives, if I love a plant and it's hardy, suits the area I'm in, I'll put it in, but the primary emphasis is always on natives.

For the keen bird lover I will note the birds that we have here, that I see everyday in my garden or bush wanderings - they include -

Yellow-Tailed Black Cockatoos - Not as often as I would like, they make a mournful cry

Whip Birds - They sound incredibly like a (melodic) whip being cracked

and two of my alltime favourites

Gang Gangs - To see them is to love them. So curious, so unusual looking, they sound like creaking doors

King Parrots - Just beautiful, quite a large bird with a high piping call.

So, on the King Parrots, we have a colony that live in the bush here all year round, so we are quite used to them, but about 7 or 8 months ago we had a male come by and show a bit of interest in our plants and then our birds. He decided that he rather liked our natives and then he decided he was interested in our aviaries. In the aviaries we have Cockatiels and a Budgie. He liked the fact that they seemed to have food-on-tap. Then one day he flew up to my husband, who was outside working on our pool at the time, and called out to him, to give him some of the food-on-tap as well; that's what we gathered anyway from his body language and persistence. So we took some seed out for him and he was most happy to dig in. He started coming by here and there over the period of a month after that, but then disappeared for months, came back again and did the same again, this time for a bit longer. Now he's back once more, and he's been busy as he's bought his mate and his daughter with him to meet us and to get some seed as a family unit. Below are some pictures of the King Parrot, eating from a plate that I held out to him, and his family eating from a plate I placed on the top of a step pier in the garden. To be clear this is a wild bird, he is happy, healthy, an absolutely beautiful specimen of a bird, and lives in the bush. He doesn't rely on us as a food source rather he chooses to share some time with us and have a bit of a feed, as he knows we are all softies and we won't hurt him. What a beautiful gift, that he trusts us and chooses to spend a bit of time with us. We know he is wild and we don't encroach on his space, if he wants to come closer to us we let him, if he wants his space we respect that. We let him dictate the contact. He is a proud mate and parent and I'm so happy he has a family now and we get to see them up close and personal. I am tickled pink to think that he has adopted us as his honourary family. I hope you enjoy the pictures below. 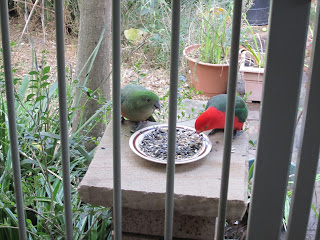 This is the male with his daughter. 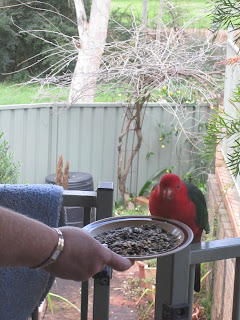 This is the male eating from a plate I'm holding 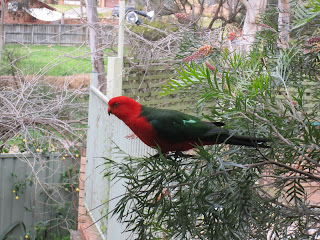 This is the male in our Grevillea Superb