This may be a quick read but it certainly does exactly what any book is supposed to do, entertain. L A Witt always writes well, and this short ebook is no exception. I like short reads when they are done right and Test Drive is done right.

Sean is degree qualified, has an MBA, which counts for squat in the economy. He's been laid off from his last job and, as a final straw, takes a job as a car salesman in dad's dealership. Dad's a tough boss, his brother and sister have both been let go from the company for not living up to his exacting work standards. However, a job's a job, and besides there is a perk in the older and ridiculously gorgeous Jackson Shaw, the dealerships GM.

After another night of working back Sean ends up being approached by the man he's been trying to distance himself from, while he is near some rather expensive sports cars -

Now here he was, strolling between glittering cars with his jacket unbuttoned and his hands in the pocket of his slacks, and there was nowhere to run....

"I've been meaning to talk to you," he said. "And I figured it would be better to do it away from the dealership. Where no one could eavesdrop."
Somehow I managed to say, "Such as?
"Well...he was quiet for a moment. Then he took a deep breath. "Listen ever since you started working for your dad, you've seemed a bit...nervous around me." He looked right at me. "Do I make you nervous, Sean?" 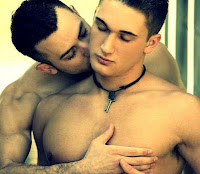 Jackson has suggested that they take the red sports car out for a test drive, after all you need to know about the cars you're flogging to customers. On the, uhm, test drive cards get shown, things get heated -

"What's wrong?"
I struggled to find my breath. "We can't ...we work together."
"I know." he dipped his head, and I shivered as his lips skated along the side of my neck. Again when he added, "But I want you so bad, Sean."

They decide to take it back to Jackson's place to test drive one another. Good idea I say!

Holy hell. If I thought he knew how to kiss. I wasn't even a little bit prepared for the way he sucked

cock. He used his lips, his tongue, his hand. The man didn't hold anything back.

They certainly are a good...fit. But the problem is dad has a zero tolerance staff-fraternisation rule in place for employees, and here is his son and his GM hooking up. Both guys are worried, no one can afford to lose their job, so they decide to keep it on the D/L then decide that it is too hard so they better not hook up anymore. Trouble is their dicks, and their hearts, have some other ideas. They have known each other for a while. Sean is now thirty four and they have both harboured feelings for a good ten years, and now they've opened the sexual and emotional Pandora's Box they don't really want to close it. So how do they do it? Do they see each other and risk being caught? Because there can be some heated glances? Or do they deny themselves and keep their respective jobs?

It all makes for a fucking scorching read. Seriously. I liked both of the MC's, they were well drawn in the word count allocated, and I wouldn't mind seeing some more of them.

From beginning to end Test Drive never skipped a beat. I thought it was a sexy, realistic and sweet ebook all in one. If you want a sexy short with emotional connection and without the often-used insta-love then this is a great read. Highly recommended.
Posted by kazzak at 23:33