A nice anthology of fifteen short stories with each having at least one character over the age of forty. 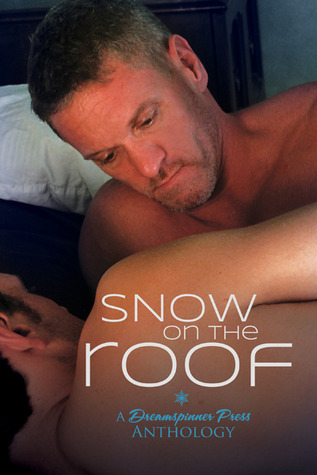 It is Duncan Skinner's forty-third birthday.  He has never been in any type of long-term relationship.  He considers himself to be bland, boring.  He doesn't stand out in any way.  All of his friends and family members are all settled in their own lives leaving Duncan as the only one without a partner or family.  When his birthday rolls around, he has no one to share it with. He decides to go out for a drink alone.  As he's leaving his apartment building he sees Felix, the only other openly gay man in the building.  Felix refuses to allow Duncan to spend his birthday alone and after a bit of discussion they decide to stay in for nachos and a Firefly marathon in Felix's apartment.  Felix is full of color and self-confidence.  The complete opposite of Duncan.  Duncan knows that Felix is far out of his league so he doesn't expect anything except some company over shared television time and homemade nachos.   Little does Duncan know but Felix has plans that include much more than Firefly and nachos.

A nice opposites-attract story with a few food cliches.

Twenty-nine years after graduating high school a man goes back for a reunion in hopes of reuniting with a former teacher who had rejected him.

The story was okay but the writing was (to borrow a friend's word for the same story) complicated.  Also, I don't know if I should laugh or be offended over the author describing a woman's internal organs as lady giblets.

Carson Hall, 42 and a romance writer, inherits an old home in Vermont from a distant aunt.  He arrives to see that the house is literally falling apart.  With the help of the local attorney Carson finds a contractor (who just happens to be the lawyer's son) Travis to come in and make the necessary repairs.  Carson guesses Travis to be straight and in his early twenties.  Little does Carson know but Travis is not as young as he appears nor is he straight.

I love books when the characters have a substantial age difference and there are quite a few years between Carson and Travis.  Nice story though it would have been nice to see a little more at the end.

A period piece about a painter and his patron who have a secret affair.  The reader can tell the two men love each other but are unable to be public due to the time period as well as obligations and expectations.  Nice story but much too short for what it tries to convey in my opinion.

An emotional story about finding love again after the loss of a long-term partner.  Charlie has just buried his partner of over 40 years, Ben.  To celebrate their fortieth anniversary the two men were planning an Alaskan cruise.  Unfortunately Ben got sick and passed away a few weeks before the scheduled cruise.  Of course Charlie will cancel.  He can't possible go on a nine day cruise now that Ben is no longer with him.  Apparently Ben had other plans.  Not only would Charlie go on the cruise but Ben had picked out the perfect person to go with him.

This is a nice story and the main reason I wanted to read this anthology.  I'm a huge fan of John Inman and when I saw he was a contributor I was eager to jump into it.  I wasn't disappointed.

Kitt Holbrook is at the end of a run on stage of A Christmas Carol.  A younger actor, Bascomb Willows, apparently made mistakes during the final performance and Kitt made this known... loudly.  At the cast party later, Kitt is informed that Bascomb has been given the lead part in The Tempest, the play that made Kitt's career.  Kitt causes a very public scene and only later decides to help the younger actor in his role of Ferdinand... the part that Kitt has played since he was in his twenties (he is now 56).  This does not always go well.


I did not enjoy this story I'm afraid.  Kitt acted (throughout the entire story) like a spoiled diva and Bascomb acted like a scared child.  There is really no relationship between the two men with the exception of a couple of kisses and a lot of animosity so this can't really be called any type of love story.

An FBI agent-in-training falls for his much older shooting instructor.  They begin a hook-up only type relationship with zero contact outside of the bedroom or during training.  The younger man wants more but feels as if his instructor wants to keep things as they are.  The story was okay though I was not a fan of either main character from the get-go.

Two young lovers who are separated by hateful parents are reunited years later and are finally given the chance to have their happily-ever-after.  My favorite of the anthology.

Wizards and fantasy.  Not my normal genre by any means but still a fun story.  An old, grumpy and set-in-his-ways wizard is seduced by an obnoxious much younger man.

The Way to a Fisherman's Heart, Tray Ellis

Jim has been fishing at the same spot for awhile just to get a glimpse of a much older Franklin. Over time they become fishing buddies though Jim really wants more.  After another day of fishing together it becomes obvious that Franklin wants more as well.

A nice story though I felt that the fishing lingo/descriptions during the sex scene was a little much.  It did not, however, detract from the sweetness of the story and it is a very sweet story.

The title is perfect for this little story.  It is about a man literally queening out instead of sticking around to find out the real story when faced with something he is unsure of.  Kevin is invited to his lover Jeff's home for the first time since the relationship started.  Later, he sees and overhears something that is not quite as it appears.  Instead of sticking around for an explanation, he runs... to a Dairy Queen.  The rest of the story takes place inside the small restaurant.  Nice story but I kind of felt that Kevin was justified in his behavior. He and Jeff have been together for a few months and are starting to get pretty serious but Jeff has told him absolutely nothing about his life or his past.  Had Jeff been even a little bit open about his life there would have been no cause for Kevin to queen out.

A nice story about two older men who find each other as a result of a note placed in a library book.  There is one particular funny part toward the end that totally makes the story.

Two men, each mourning a spouse, meet during a survivors meeting.  Over a period of months of weekly meetings and spending time in a coffee shop afterward they develop a friendship that turns into more but only after another member of the group inadvertently pushes them in the right direction.  I enjoyed this but felt that the back story of one of the characters, Don, could have probably been left out.  That particular bit of information changed my opinion of Don pretty late in the game and not necessarily in a good way.

A nice story about two men who come out of the closet in their sixties.  One is mourning the loss of his male partner and the other lost his wife two years prior.  This is an entertaining read but like other reviewers I felt that there were a few too many characters thrown in.  This took away from the two main characters.  There is a slow build up which would have been nice had it not been such a short story.  Otherwise, a good read.

Overall, this is a good anthology.  I am a big fan of books with older characters so this collection of shorts was right up my alley.  However, there are quite a few editing issues throughout, in one case an author's name is spelled incorrectly.  This, of course, could have just been my copy.  An entertaining read.


This anthology was provided by Dreamspinner Press in exchange for a fair and honest review.
Posted by Cindi at 09:12