Confessions of a Gay Rugby Player

If you are looking for a M/M romance all I can say is "Wrong Way, Turn Back." ﻿

Rugby Union is great game. It's a rough game - look it up if you never have and check out a ruck or two. I'll give you an idea. My brothers played Union. They are 6'7 and 6'5. Imagine them bearing down on you and you have to try and tackle the big buggers as they come at you with the ball. No padding, no nothing - shorts, jersey and a football. Imagine a team of them on top of you gouging the shit out of you, turning you into a pretzel in a ruck. So yeah, they are an adventurous, very hardy sort, and this was portrayed well in Confessions of a Gay Rugby Player. 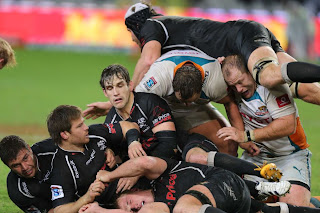 Conor Murphy is part of the Dublin Chiefs, an Irish Rugby side that has just been beaten by the team from San Francisco, but not without a tight on-field tussle, particularly between Conor and the sexy San Fran player Tonio. Conor would like to get some of that action with Tonio, but off the field this time...in the bedroom. Conor shares a room during the tournament with fellow player and friend, Sean -

I'm fond of telling Sean he is like the big brother I'm glad I never had. That's how close we are, thick as thieves. It's the back row forwards union.
Sean has taken me from a closet case to an "out and proud" A list gay. Well, I like to think of myself as an A list gay, anyway. No one else thinks that, but my ego is not for turning.

So Conor, Sean, and the lads from the team are about to go out and celebrate the tournament closing party at a local bar with other team members.  On-field competition may be over but now the off-field fun is just starting -

XXXL is an enormous venue. Like most nightclubs, it's dimly lit with pockets of darkness and plenty of hidey-holes. The club smells of fresh sex; we immediately feel at home.

From here things get down and dirty. Conor is on the look out for Tonio -

He is tall, like me, and has a great physique with a deep tan. Thick, black hair and chocolate brown eyes top off the gorgeous package....
He has great arms and pecs, and I can see the dark chest hair poking out from under his vest. This man is mine.

But he gets distracted by a hoover-esque blow job by a cowboy from Texas, Chad -

After making my balls suitably wet and tingly, he moves back to my shaft. I seize the moment, grab the long blonde hair on his head and stuff my cock deep into his throat, He takes my unsubtle hint and gets to work. like the true born cocksucker he is.
....as the pent-up belligerence takes over, and I start to throat fuck him very hard. Deep, long thrusts into his mouth. I want to feel his lips all over my shaft....

After his encounter with Chad, Conor is still plenty horny and back on the hunt for Tonio; wanting to let the off-field games truly begin. He runs into Stefan an old "ride" from the Copenhagen team, but his third time with Stefan is not to happen tonight, maybe next time. Conor finally links up with Tonio, they dance until 3am. Then it's time to get back to the hotel room to claim it before Sean does - whoever gets their sock on the door first has the room to themselves...and their fuck buddy. But they make a pit stop on the way to Conor's bed in a small utility room and Conor starts in on Tonio. The book goes into a pretty long fuck-fest from here starting with ice, an ice box, armpit licking, through to fucking and felching. Snippets of some of the action ahead -

I grind my hard groin against his, as I tongue-wash his pit. I give him the look half way between "I love you" and "I want to kill you." it is my famous  "I will fuck you to death" look.

I rub the melting ice cubes over Tonio's ass cheeks before biting his left buttock. I'm all about the biting today.
"Spread your ass, boy." Two broad hands reach back and reveal his fuck hole to me

Tonio has a wonderful dick with a thick vein that runs along the top. Like most men from this side of the ocean, he is cut. ..

I take Tonio into my mouth. At first I gently suck on the tip of his meat, rolling my tongue around the head without applying too much suction. Then my throat relaxes and engulfs Tonio's cock I feel him grab the back of my head, and he face fucks me...

My right hand moves to wank his cock off in unison with the thrusts into his ass. We are glued together in one hot, nasty fuck.
"Squeeze your ring," I whisper into his ear. "Tighter."
"Fuck me harder, you cunt!" His power ass sure is well trained. I give him what he wants and fuck him more violently. I can feel the sticky pre-come in my hands, and I move my fingers to his mouth so he can taste it. He greedily sucks on them....

So this gives you a pretty good idea of what Confessions of a Gay Rugby Player is like. It is gay erotica, with some humour, some charming Irish turns of phrase, a bit of Rugby, just enough to give the reader a feel for the toughness of the game - although I do not know of guys who are thinking about arse when they are playing, you're liable to get your block knocked off. No matter, it's all good dirty fun. All of it presented in an easy to read style. And I liked it indeed. But then I do like some down and dirty erotica

4 Rugger Bugger Stars
This book was supplied to me by the publisher, Wilde City Press, in return for an honest review﻿
Posted by kazzak at 17:31