The book's official blurb says a lot about the book. Hart Sherman is a liger - yep, a tiger and lion parent mix. He's 6'7" and an overall big man/shifter. His father kicked him out when he was eighteen and he has carved out a career as an entertainment attorney with high profile clients on his books. Hart drives a nice car owns a nice apartment in Atlanta, but his long standing need to be with his mate, Dayton Whitmore, is now pushing him to reconnect with him.


Dayton is a human history teacher in a smaller community in Atlanta. He has gown up with the lion shifter pride and they have all accepted him as one of theirs. His parents weren't the best so they took him into their fold. Malachi, the alpha, likes Dayton, and Tawny, Hart's sister, is Dayton's best friend. She has decided to play matchmaker to finally get Hart and Dayton together. Dayton is not so easy to catch, despite the attraction that is there between both men. He knows that if they mate it is for life and, besides, having a liger shifter as a partner is a bit daunting.


What worked for me -

The premise is nice - liger/lion shifters, I don't believe I've read one about them before.

The book is sweet. 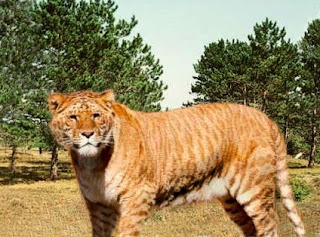 There is the obligatory mine used, which I always have to have in shifter/paranormal reads.

The main characters are nice and easy enough to read about.

It was quick to read. I read it in a sitting.

I felt like this was part of a series and I missed the other one or two books that preceded it. I felt like I was dropped in the middle of something.

There really wasn't any world building and in a novella up I do expect more.

I didn't understand the Rick story line. Why did he do what he did?

The endearments didn't grab me.

It was a bit too sweet for me. A bit too Harlequin romance

Born This Way is a quick, easy, sweet, read. There is no information overload and there is a  HEA. If you like your shifters done this way then this novella might just be what you're looking for.


3 Liger-Stripe Stars
This book was supplied by the reader, Dreamspinner Press, in return for an honest review.
Posted by kazzak at 05:20