Woo hoo! to my Alabama Crimson Tide for winning their 2nd National Championship in a row!

I made a promise to not post anymore about college football on this blog until the season starts next year unless one or two things happened.  One, if  Alabama won the National Championship game against Notre Dame on January 7, 2013 and, two,  Nick Saban, our beloved coach, defected to the NFL.  The Alabama Crimson Tide dominated in the championship game against Notre Dame and won their 15th recognized title (the 3rd in 4 years and the 2nd in a row) and we diehards are crossing our fingers that Mr. Saban won't break our hearts.  But then again, the man has done something only three other college coaches have ever done... he has won 4 championship titles in his career, one at LSU and three at the University of Alabama.  I try not to mention the first one as that school is my most hated rival (even over our in-state rivals, Auburn).  What else is there to strive for in college football?  Beat Alabama's most revered and loved Paul "Bear" Bryant's record of six titles?  Sure, why not.  I hope he sticks around as he has done things for this football program that some thought impossible and he has brought back respect to a school and program that was starting to slip in years past.  Also, could you imagine being a senior on that team graduating with 3 national championships under your belt?  Most kids who grow up playing football only dream of getting the one but to get three?  It is amazing. 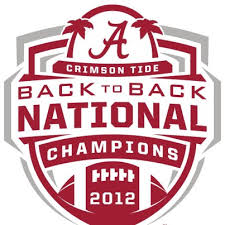 I won't list all the records broken during the 42-14 win against Notre Dame.  There were too many to count.  The Tide came out swinging in the first few seconds and never stopped until they had that crystal trophy in their hands.  My husband and I never even had a chance to get nervous about the game as it was constant scoring on Alabama's part.  I am proud of my state. I am proud of those players and coaches who gave it their all, mainly our hometown boy, A.J. McCarron, the Tide's quarterback.  I am truly proud to be a Crimson Tide fan.  To Notre Dame, a team I grew up having the utmost respect for, there's always next year. :)