Promises Made Under Fire, Charlie Cochrane


A really charming and poignant M/M romance set during WWI. This is a lovely piece of writing. Set during WWI, it spans the period of 1915- 1918, wars' end, but it is done in a succinct manner as the ebook is not terribly long.

Promises Made Under Fire starts off in France, 1915 with two men who are officers in the same battalion in France, Captain Frank Foden and Lieutenant Tom Donald. Frank Foden is a decent leader and Tom believes an ally. Someone whose company, wit and positivity he enjoys. The letters Frank receives from home he  readily shares with Tom, and Tom loves to listen to them. He knows all about Veronica, Frank's wife, from her photo to her career. He also hears about the Foden family's 'working class' background - his mother the cook, his stern letters from his aunt in Islington. Veronica is the source of much pride and discussion with all the men, though. She's a doctor, unconventional for the time, who has married beneath her class when marrying Frank Foden, a 'chauffeur.' It was 'love at first sight.' Frank understands the morale of his men, Tom believes his roots help. He is upbeat in his outlook - whether it be a dull day, a bleak battle looming, or making sure the men get their own letters from home, Frank is always optimistic -

He smiled, that smile potentially the only bight spot in a cold grey life. Frank kept me going, even on days when the casualty count or the cold or the wet made nothing seem worth living for anymore.

The battlefield is mentioned briefly enough for you to get a picture, but not so much as it to be deemed anything more than a M/M romance with its setting in WWI. Frank dies in France, in battle, and Tom goes home to recuperate from injuries sustained at the same time. He has a slight meltdown, more of an uncharacteristic cry, at his brush with death, the loss of his friend, Frank Foden, and just how unpleasant everything is; on top of being a same sex attracted man who cannot express his feelings to anyone.

When Tom returns from his recuperation, the corporal who served both Frank and Tom prior informs Tom that Frank has left a note with requests for him to see Frank's mother and a request to take a letter, in person, to someone he has never mentioned before, Ronnie Palmer. It is on another return to England that Tom does the things asked of him by his former Captain and friend. He visits Frank's mother, feels that he should reach out to his wife, Veronica, but he has trouble locating her, and he also visits Ronnie, with the letter. From here things take an interesting turn.

I actually want to review the book in full but it won't really do it justice and will spoil it for the reader. Not because you can't work some things out, you can, but it is short and the writing is beautiful and charming and takes you back in time. It makes you think about the difficulties facing same-sex attracted people in another time - 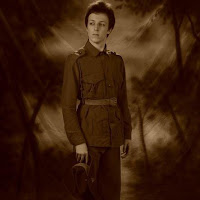 Jonny was one of my sins. Jonny, the chap I'd fallen in love with when we'd been students together in London.....
We'd been inseparable up until the call to arms separated us - just about the only thing to have been able to do so, short of death. And that followed not long after, taking Jonny just after the Christmas it was all supposed to be over by. He'd been lain under the grass of France before I even crossed the Channel, and before I'd summoned up the bravery to tell him what he meant to me and find out if he felt the same.

I'm certainly of an age where I understand quite well a lot of what is being said and written in this book. If you don't understand some of the sayings or unique vernacular of the time I dare say it's easy enough to look them up.

The writing was beautiful, the letters lovely, and an integral part of the story, the characters well drawn, including the stoic attitudes, and the vivid period setting. All in all it is quite lovely -


They don't tell you in advance how it will feel. I wish they did. Monday bayonet training. Tuesday grenades. Wednesday how you know you're in love.﻿

For everything that was positive, and mostly this book is wonderful, I had a one niggle. The ending was anti-climactic and slightly disappointing for me in comparison to the beautiful story and writing that preceded it. I can believe in the ending, given everything that had happened to the main characters. It is hopeful, but I'd be lying if I said I was truly happy with it. I would have loved this book to be longer. It probably would have been a five star read. I just wanted more.

This is a lovely read. Nothing is lost in the narrative being solely from Tom Donald's POV. It isn't long, so it's incredibly easy to devour in a couple of hours. It certainly pulls at the emotions and makes you think about men who had to live a lie in order to continue to be who they really were, which sounds like a contradiction, but isn't. I definitely recommend Promises Made Under Fire for those who like a M/M romance in an historical setting.


Frank had been able to boast about his love in a way I'd never had the privilege of doing and he'd had me and all the other men congratulating him on his luck. The more I thought about it, the more I admired Frank's brass neck, and he seemed clearer to me than he had in life....