Beyond Shame (Beyond #1), Kit Rocha


Tend bar, clean house or, suck dick. When you're cast out of Eden these are the options for living in Sector Four.

Noelle Cunningham is cast out of Eden for indiscretion number three. She is the daughter of a high ranking family and she is in total shock when she finds herself out in the sectors from her cloistered life in the prudish and controlling Eden. Luckily, for her, a saviour in the form of Japser sees her, as she literally falls into him, and takes her back to Sector Four and O'Kane turf. Jas is the right hand of Dallas O'Kane the leader of Sector Four. Lex, the dominant female and sexually fluid devotee takes a shine to Noelle and helps secure her a safe position within Sector Four.
Beyond Shame is like the love child of Mad Max and Sons of Anarchy, only with an erotic current running throughout. In Sector Four anything goes and they like their women raunchy. Sharing is definitely their thing which is a surprise to innocent, contained but willing study, Noelle. Eden is puritanical and her father is akin to the Mayor of Prudetown. So her new 'home' is a culture shock to say the least  - with its freedoms and liberties and brutality. Eden is more about outward appearances, control and manipulation. The sectors are about shows of strength, 'family,' alcohol-running, and semi-contained anarchy.


What I really liked -

The world building is pretty darn good. You get a feel for the time - solar flares have wiped out the system that we know, and Eden is a 'walled off,' corrupt yet incredibly uptight, controlled city. Outside Eden are the sectors, communes - farms controlled by Eden - illegal farms run by independents that the Eden military seizes and more. The setting is good, strong and was actually the best part of the book - the cage fights, the moonshine operation, the concept of the O'Kane 'family,'   the different sectors waiting to be explored more, the intrigue as to who was trying to kill one of the  O'Kane's. Knowing who someone was really after and why. There's an attempted bombing, a sniper, their justice - I was glued during these parts.

Lex. She is a strong woman and the alpha female of Sector Four. And the love of Dallas O'Kane's life. But they lock horns, clash, and don't tell each other they love one another. I wish they had started with this pair as they are like the Beth and Wrath (BDB) of this world.

The women were strong.  They give as good as they get and they are capable, by and large. I like this in a book.

I liked that the writers went with sexual fluidity, and that some women were together, as well as with men.

The book was very well edited and technically these two writers know how to write, and write together as one.

The cover is beautiful.

What didn't work so well -

I read non-erotic books where I have no expectations of sex, it might even get in the way, and that's what happened here. This would have been a vastly superior book if it were urban fantasy. I go back to what I liked - I loved the detailing of the O'Kane's, their activities, their camaraderie. I would still like some sex in this series, for sure, but not the way it was handled here.

Noelle started out fine. She's new in the sectors, having been cast out of Eden for indiscretions - she's a naughty expat Edenite.With desires and lust and big eyes. Yes, her big eyes get mentioned, a lot, as do furrowed brows. However her big eyes and not knowing who she is or what she wants grew tiresome. I mostly saw her as needy. Needy and co-dependent. She wanted a man, a body, and Jas was it, by way of Lex and Dallas. She grew near the end, but not enough. Noelle stayed two dimensional for me.

Jas had the most unbelievable potential to be one of the hottest, nicest characters, but so many other characters got in the way of his potential and his development. Once again, Jas remained two dimensional. The secondary characters overrode the primary ones. Because this is supposed to be Jas and Noelle's book that was a shame.

Lex was a fabulous female - strong, independent, sure of herself, no man's toy or fool. She wanted Dallas but, like Dallas, she has pride and she is the alpha of the Sector Four women. She's a very good character all around. I liked her sexual fluidity.

Rachel - another good character, she didn't just put out for anyone and she had Ace, a big man whore, desiring her because of it. She was a bartender and an all-rounder. She can fix anything mechanical. I liked her, once again a strong, no-nonsense female.

Dallas O'Kane - the head of the O'Kane gang. He was interesting, strong and alpha and he wanted Lex but, as with Lex, pride was his issue.  He keeps Sector Four running and he had his finger in all sector activities..

Ace - the resident tattoo artist, man-whore, smart-arse, but he did good work, and he was interesting as a secondary character.

Bren - a (potentially) very interesting, enigmatic, alpha character who could be interesting in his own book.

Six - an angry cast-off from another sector. A vicious little thing who had no problems killing like a man.

Nessa - worked in the O'Kanes distillery

Maddox - another enigmatic character who looks like the strong, silent alpha type 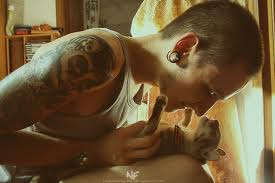 Beyond Shame is an interesting book. It has the potential to be a very well received series and to grow. I think it will certainly gain more than a few supporters. I felt it suffered from first-book-in-a- series-itis, too many characters to break in. It is unusual - a dystopian erotica. It's a seamless co-write by two obviously talented authors. There are some very good characters in the book looking for their own story. I will certainly read the next book in the series to see where it's going.
Posted by kazzak at 00:35