I'll Be Watching You, Benjaim Cole


*THIS REVIEW CAN BE CONSIDERED AS CONTAINING SPOILERS**﻿ I'll Be Watching You is a novella with an interesting premise. A serial killer who becomes besotted with young men of a particular type. Who decides he is in love with them, stalks them, drugs them, ties them up and strangles them to death, all whilst crying and listening to the Police's stalker anthem, I'll Be Watching You.

When the book begins Angel doesn't know what has happened to him he is disoriented and sees a body on a bed being strangled. He wants to help the young man but he can't seem to work out how. Pretty quickly he realises it's his body he has watched being strangled and he is now in the afterlife.

We then move to Andy and Jeff. They're friends who are at a horror movie, something they both enjoy. Andy is a Chatty Cathy throughout the movie and gets shushed by a fellow movie goer - who ends up getting up and moving seats, letting them know he is not impressed. After the movie, Andy and Jeff see the same movie- goer who shushed them eating at a fast food outlet. Andy can't help himself, he's a friendly guy, he has to talk to the guy he obviously upset in the movies to generally explain himself and apologise if he ruined the movie. Andy can't help but get upset when people stupidly make bad choices or walk into danger in the horror genre. Henry sees Andy as perhaps a tad annoying but easy on the eye.

Brendan, the serial killer, is having problems with his apartment's electrical equipment so he calls out a service electrician. Andy is the electrician that ends up at his place, but he can't find any reason why these strange and random occurrences are happening. But he is nothing if not thorough, so he goes next door to see if the neighbour is experiencing the same difficulties. Of course he isn't, because it's the spirit of Angel who is fritzing out the electrical appliances. It's Angel's way of getting back at Brendan. Angel is lonely and angry and he wants to drive his killer crazy with his new found electrical-fritzing prowess. The thing is, the next door neighbour is none other than Henry the Shusher. Once again, Henry sees that Andy is a nice looking guy and he is nothing if not a genuinely friendly person, so he is attracted to him, and Andy to Henry. Meanwhile, Andy has now just come onto Brendan's psycho-stalker radar big time - he fits his type very nicely indeed. So I'll Be Watching You can get cranked up again.

Andy and Henry start dating as another dynamic enters the picture.Veronica, aka Ronnie - Andy and Jeff's gal pal - has the hots for Andy, even knowing that he is gay. She, too, has a kind of Andy-obsessed thing going on, although she is a good friend.

So you work out pretty quickly that the story is going to go down the path of Brendan stalking and somehow getting his mitts onto Andy. You also know Angel will figure into it somehow. How it will  all come together is the unknown. 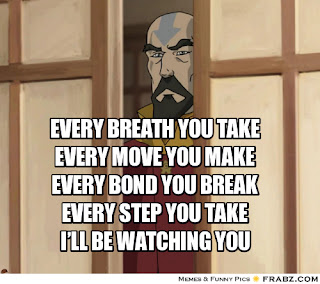 I found myself laughing at Andy being chatty in the movie. I know what it is like to want to talk to the move screen, or at least the characters. I also understood Henry feeling miffed.

Andy is a sweet guy and I liked that

The character of Angel is an interesting addition to the story

For someone who likes M/M romance with a bit of horror - that is not too horrifying, but has its moments - this is a good book

I felt for Angel and he tried so hard to do the right thing. His frustrations

It is at heart a sweet book, despite the topic

The constant changes of POV - Angel, Brendan, Andy, Ronnie... it is way too short a read for this and it became choppy because of it. And there were too many POV. Why did Detective Gutierrez get a POV?

And speaking of Detective Gutierrez, I wanted to slap her into next week - who comes into a crime scene where a serial killer is dead, a victim tied naked to the bed, and takes the time to notice how sexy the victim is - no! that was inappropriate. I like certain things in my fiction rooted in fairly reasonable reality

Andy is a likeable guy, Henry seems nice, but there wasn't enough development of the characters and their relationship. Too much was thrown under a wide umbrella encompassing other characters. Because of this the MC's chemistry suffered

There was a gap between Andy and Henry getting together and the point where they were intimate. I felt like I missed that important lead up and then that moment when it all happens for the characters as a couple; where we get to see a build and a spark

I didn't feel like Angel had the proper farewell. I wanted more

There are things that are both positive and negative about I'll Be Watching You. It is sweet at heart, and there was a good concept here. The execution needed a bit more. There is a paranormal aspect, there is humour, a murderer, as well as a romance - all in a quick and easy read. If you like those things then I'll Be Watching You may be what you are looking for. I liked the quirky and enigmatic The Vampire's Partner more than I'll Be Watching You, but based on both books I will be looking for more from Benjamin Cole to read in the future.


3 Nearly But Not Quite Stars