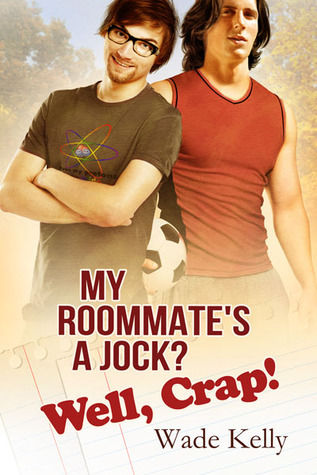 I will start this review by saying that I love books about nerds and the wearing of glasses is mandatory as I have this thing for men who wear them.  I am not a fan of the title but yet this book has been on my to-be-read list for months, since shortly after it was published.  When the author asked if I would read it for a review, I was eager to jump into it as it is a book I had every intention of reading anyway.  My thanks to the author for pushing me to move it up on my list and for the e-copy.

Cole Reid is a nerd.  He is also not the nicest guy in the world.  Having been outed and burned by a group of jocks while he was in high school, he has a hate for anyone wearing a sports uniform.  This hate is well known to those who know him.  He is also cynical about life in general. This does not endear him to most and he can only call one person a friend, his former college roommate.  When the roommate dares to graduate and move out of town with his girlfriend Cole is stuck with the task of finding another roommate for his last year at university.  Cole is also OCD and is anal (no pun intended) about the apartment that he must eventually share with another student.  When he is unable to find someone who can tolerate him to live with, the housing advisor for the university does it for him by selecting Ellis Montgomery to be his roommate.   Ellis is not picked at random. The reasoning behind him becoming Cole's roommate comes out later.

Ellis is a straight soccer player and the exact opposite of who Cole wants to live with.  The first meeting does not go well as suddenly Cole's clean and organized apartment is overrun by a group of rowdy jocks.  Cole makes his anger known by being rude to not just Ellis but his friends as well. Over a period of weeks Cole begins to see that Ellis and his friends are not like the jocks who made his life a living hell his last two years of high school.  Of course, he is still cynical so he doesn't go out of his way to give them a chance even when this is proven.  As time goes on, Cole and Ellis begin a reluctant friendship that kinda/sorta turns into more before something happens that knocks the relationship and friendship back a few steps.  Thus begins my first issues with this book.  While I thought my issues would be with Cole as he is seriously not a nice person, my initial problems begin with Ellis who had, until this point, come across as a very decent human being.

Cole and Ellis have been building up to a sexual relationship for weeks.  Finally, they have sex and Ellis freaks out.  I expected this as I don't know that I've read a nerd/jock book where the supposedly straight jock did not freak out after his first taste of gay sex (and believe me, I've read a lot of nerd/jock books).  Ellis did not just freak out over the experience.  He treated Cole horribly and then went on to do things that showed what kind of person he really is.  Until this, I liked Ellis a lot. I had a hard time coming back from that.

Other issues for me:

-  Ellis's mother.  I disliked her from her introduction and this lack of love did not improve as the story played out.  Ellis has a serious accident on the soccer field and is rushed to the hospital. He goes to go stay with his parents afterward.  Apparently "Mom" is suddenly feeling maternal toward her middle child when apparently she hasn't up to now.  Ellis is twenty, not twelve, but dear old Mom treats him as if he is.  The poor guy is bedridden.  He can't get up and move around on his own.  He is stuck either sleeping on the couch or staring at the walls for days on end.  She won't even allow him to take a shower. She then takes his cell phone away for over two weeks. Why does she do this?  Because she wants all of Ellis's attention on her and can not handle the fact that he may want to interact with anyone else, even his best friends.  Sure, the friends are allowed to visit Ellis on her terms but she stays within earshot at all times.  Cole, after a major misunderstanding involving Ellis before and after his accident, comes to visit and Ellis's mother treats him nasty from the get-go.  When she sees that Ellis is smiling for the first time in days (because of Cole) she gets even more 'maternal' and her nastiness increases.  She had never met Cole up to this point but she knows that Cole is making her son smile and this angers her.  SHE should be the one making her son smile, not some nerdy kid from college 'who has not cared enough up to now to visit Ellis'.  She is selfish and manipulative and if I treated my sons this way it is doubtful I would still have much of a relationship with them.

-  Ellis calls his mother mommy.  Did I mention he's twenty?  I did not find this cute in any way.  I have raised three sons and I have to admit that my two younger ones (now adults) call me that sometimes just to annoy me.  It's in fun.  Ellis, on the other hand, does it with his mother because it's the norm for him. No jest there. He is dead serious.

-  Ellis's mother walks into Cole and Ellis's apartment without knocking.  She finds them in a compromising position (serves her right).  Does everyone have a key to the apartment?  She is not the only character who walks in without knocking.

-  The excessive use of exclamation points throughout.  If you have ever read any of my reviews before now, you know how I feel about that so I won't elaborate.

-  The points of view are all over the place.  When the book is referring to Cole it is in first person. Everything else is in third.  I found this to be confusing as it changed constantly and I had a difficult time keeping up.

-  Ellis has a group of friends who also befriend Cole.  This is before the nature of Ellis and Cole's true relationship comes out.  I liked all of them with the exception of one who does something horrific to Cole much later in the book.  This event was thrown in out of left field.  At no point did I see this character as being capable of any type of hate crime so when this happened I was shaking my head.  Also note that this person is not a huge part of the story.  He is only mentioned in passing to this point.  Apparently he's not only a homophobic bastard but he hates short people as well (seriously).  Being vertically challenged myself I would have loved to have that bit of info early on so I could despise him from the onset. :)

I know that what is listed above makes it look like I did not enjoy the book.  That is not the case at all.  I enjoyed watching Cole finally get over his bad attitude and give Ellis a chance.  He also realized that not all athletes are like the ones who bullied him in high school.  The relationship between Cole and Ellis took awhile for me to come to terms with but I did eventually.  Once their issues are resolved (with the exception of the mother) I really did enjoy seeing the two of them together.  There is also a lot of humor in this book and I devour books with humor in them.  A couple of the secondary characters came across a little on the creepy side but not enough for me to dislike them.  Another thing I enjoyed is that the roles are reversed in this book compared to others I've read involving a nerd and jock.  That was refreshing.

Overall, a nice story about a typical nerd and a not-so-typical jock.


This book was provided by the author in exchange for a fair and honest review.