"I think maybe I already had what I wanted, at home. But I didn't see it for what it was. There was always somewhere else to be, and if I got there, something great would happen, or everything would seem different, but...." This short ebook covers several themes I like - a contemporary M/M romance, paranormal, in this case via a ghost, and some history.

When we first meet Sean he is on the road, travelling, looking back at his life and a significant relationship through somewhat regretful eyes. Sean was in a committed relationship with Zack. There was nothing wrong with their relationship, yet Sean had a need to go elsewhere, leave his job, his partner and travel. Zack was happy and content doing simple things but he'd accommodated Sean in his wanderlust. Sean didn't see that as enough, it was time for him to move on again. Only this time on his own. He felt like there's much he was missing out on. Although what it is he wasn't sure -

"What's wrong with being here?"
"I don't want to be here. I've seen it all already. There's nothing new."
"Why does it have to be new to be worth anything?"

Which is a pretty fair question posed by Zack. Something that Sean starts to appreciate more after ten months of travelling to new towns, new 'adventures' that aren't so great. Searching so hard that the little things, that can be so great, may just pass you by, and you can risk missing something special and worthwhile. This time Sean is on the road, again, thinking of Zach - how they watched movies together, laughed at little jokes, or how Zack felt when they made love - when a snow storm blows in leaving Sean stranded on the road and freezing cold - 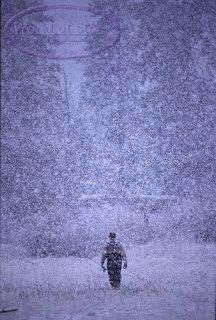 The wind pummels him, shoves him this way and that, sends him stumbling to his hands and knees. He knows he has to get up, but they might as well be a thousand pounds holding him down. He's a sieve for the snow to pass through....It's hard to breathe and harder to think....
An icicle hangs from one small branch, perfectly sculpted. This is what he'll be by the end of this storm. He'd like to conjure up a worthy final thought. Something beautiful to focus on....He sees Zach on an afternoon ages ago...When it was still about the two of them, not Sean and his whims.

But as he is slipping into sleep a dark figure appears in a long black coat and much needed heat, even though his hands are not gloved they are warm. Next thing you know Sean awakens in a cabin in the snow with a distinguished looking older man, Ezra.  Ezra is helpful, yet has a sadness, a loneliness that Sean can relate to. Yet Ezra looks after Sean, feeds him and keeps him warm in this little cabin in the snow. 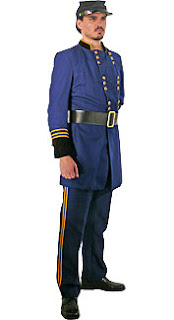 It's not long before Sean works out that Ezra is a ghost. A ghost who fought and died in the Civil war. He still wears the Union blue trousers with an officers stripe. Ezra tells Sean of his experiences with a young man, William, and his heartache at what becomes of him. How he enlisted so he, too, could die and be with his William. He is also unsure why he hasn't passed over to another plane, felt sure he would have found his William before now -

"William was buried near the field where he died. Everywhere we fought, I wondered of I'd found my grave, and I'd estimate the distance to his. Being only one state away was reason to be glad. The closer we were, the sooner I'd find him in the next world, I was certain."

I won't go into anymore detail, as it is a lovely read and I've already written enough. Needless to say Ezra is a huge catalyst in Sean's life, causing a significant shift in his attitude about what/who constitutes something important....and wandering aimlessly is not it. Sean also brought much to Ezra as well. They both needed one another to be able to move on. 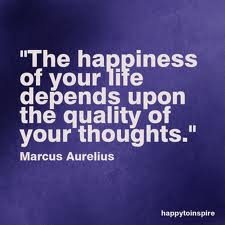 Icicle is not a long ebook, however it is a lovely, romantic one. With some meaning. Loneliness can be there for the taking easily enough. but happiness is something that starts with your own outlook. I have come to enjoy stories where there is a ghost in them recently, and this is another that I very much enjoyed. Ezra was kind and wise. I was glad to see Sean have a change of heart, and I liked the ending very much.

I highly recommend Icicle for those who enjoy a quick, sweet book with a contemporary setting, but with  a paranormal theme involving a ghost. Also for those who like the concept of second chances with a nice ending.